A walk through the ages in Hambeldon: An English village.

Hambeldon is a small village near Wycombe, Buckinghamshire, situated in a wooded valley between Marlow and Henley-on-Thames. The name Hambledon derives from the old English words hamel, dun and means 'crooked or irregularly-shaped hill': http://met.open.ac.uk/genuki/big/eng/BKM/Hambleden/.

With the aid of the ‘No Through Road: The AA Book of Country Walks’ (1976) we began our walk at the Stag and Huntsman Inn (known as the Dog and Badger until 1820), taking a 4.5 mile route through the village and surrounding woods and farmlands. Using an out of date map added an edge to the walk when instructions based on landmarks have changed over the intervening 37 years.

Our instruction sheet offered thirteen notes on directions and seven points of interest (A-G): this is how we got on. 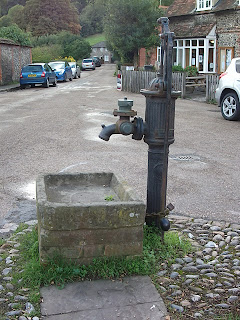 The village pump.
Point of interest A: The Old Rectory, built in 1724, probably on the site of an older manor house occupied by the Earls of Mercia, Queen Matilda, King John (as Earl of Gloucester) and Gilbert, Earl of Clare, who was one of the signatories of Magna Carta. Thomas Cantilupe was born here in 1218 and became Bishop of Hereford, Chancellor of England and was the last pre-Reformation saint.


Point of interest B: The centre of the village includes a cluster of brick and flint cottages, about 200 years old, and topped with dormer windows and red tiles. In 1315 a Royal charter was granted to hold a market in the village, and a fair on St Bartholomew's Day (August 24) every year. [The village is little changed over time and was used as a setting for the film Chitty Chitty Bang Bang and for TV’s Midsummer Murders]. 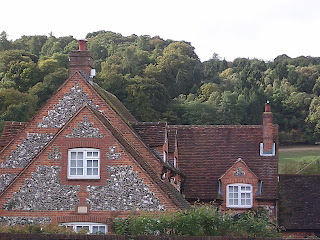 
Point of interest C: The flint and stone built Manor House was built in 1603 by Edmund Scrope, Earl of Sunderland. Charles I stayed there overnight in 1646 while fleeing from Oxford. Nevertheless, two Hambleden men, Adrian Scrope and Robert Deane were signatories on his death warrant three years later. The house passed into the hands of W.H. Smith, of bookshop fame, and his widow was created Viscountess Hambleden in 1891.
The Manor House was reportedly sold for £38 million in 2007. A word of warning: our walk took place on 17th October, in the midst of a pheasant shoot based at the Manor House. The valley rang with gun-shot as pheasants took to the air and birds of prey circled round searching for the kill. 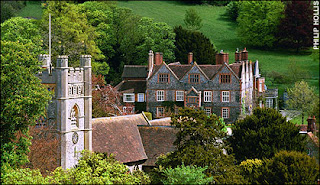 Point of interest D: New Cemetery is the final resting place of W.H. Smith, who died in 1891. This lych-gate is a memorial to him. 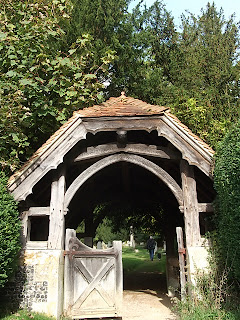 Point of interest E: St Mary’s Church made of brick and flint dates from the 14th century. In the north transept is this conspicuous memorial to Cope D'Oyley (who died in 1633) his wife, and their ten children. 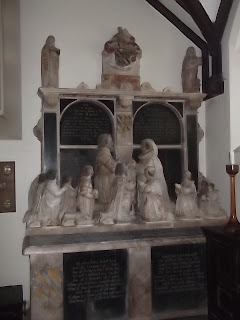 The south transept has a 15th century oak carved altar screen, known as the Wolsey Alter, because it is said to have been carved from the foot and head boards from Cardinal Wolsey’s bed. Other items of note include a crucifix from Oberammergau in Bavaria; a rare triple sedilla in the chancel (a seat used by priests); the ceiling is quite intricately decorated in parts; and  the tower contains eight bells.


On the northwall of the nave is a tablet to Francis Gregory, a former rector, who died in 1682.


2.            Ignore footpath sign before bridge, but cross stile at sign after bridge. Bear left to top of field and over stile on to the road.


This is where we got lost, probably because we underestimated the distance, and followed our tracks back the way we came. Had we carried on, this is what we would have seen.

Point of interest G: Viewpoint. Greenlands. The current house was built on the site of a house owned by the D’Oyley family in the 17th century.In the early 19th century the house was rebuilt by Thomas Darby-Coventry and sold  in 1868 to William Henry Smith, the son of  W H Smith. He extended the building and Jerome K. Jerome described it in Three Men in a Boat (1889) as ‘the rather uninteresting-looking river residence of my newsagent.’ The house is currently the home of Henley Business School.
.

Views from here are of the Thames as it flows downstream to Hambleden Lock and the weather-boarded Hambleden Mill (dating from 1338). Hambleden was the site of a mill in 1086 when the Domesday Book was being written. [The mill and lock were also mentioned by Jerome K. Jerome]. 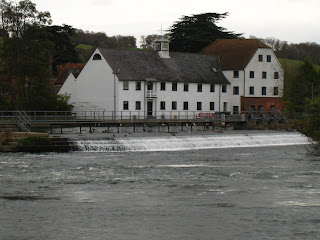 The remains of the Roman villa, Yewden Villa, was excavated in 1912, by A H Cocks, a former curator of the Buckinghamshire County Museum.  The site produced a high number of iron styli (pens for writing on wax tablets), drying kilns and a very high number of infant burials (97 infants). Examination of the skeletons by Dr Simon Mays of English Heritage has revealed that the infants almost all died around the time of birth, suggesting this may be an example of deliberate infanticide: this was legal in Roman times if the baby was born to a female slave. Speculation continue of babies as to whether this was the site of a Roman brothel, or evidence of Hambleden as an Imperial supply depot, with a high number of female workers. 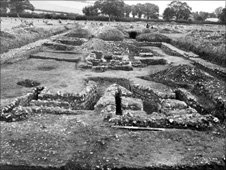 We have followed a number of walks detailed in this book and one thing that has been universally reliable has been the standard of the pubs from which each walk commences and, of course, ends. The Stag and Huntsman was no disappointment and had the benefit of being a dog friendly pub, so all our needs were catered for. 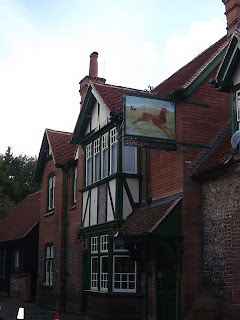 The Stag and Huntsman.
Unless marked otherwise, all images are the authors.
If you have enjoyed reading this blog, please follow me using the link on the right-hand panel.