Owen Davies presented a paper ‘Healing traditions, 1700-1900’: He is a professor of Social History at the University of Hertfordshire, currently exploring the curative powers of the criminal corpse in European magic and medicine.


Pliny the Elder’s ‘The Natural History’ is an early encyclopedia, [c.AD 77–79] which became a model for later scholarly works as a result of the breadth of its subject matter. His work follows Galenic theories and shows that the use of corpses in early medicine was widespread, as was the use of ground bones in medical preparations, and he reported on the drinking of blood of Gladiators who died in combat (apparently a cure for epilepsy).


Paracelsus [Philippus Aureolus Theophrastus Bombastus von Hohenheim, 1493-1541] was a German-Swiss intellectual who tried to break out of Galenic theories and used experiments to test his theories. His significant contribution was his focus on chemicals as curatives, albeit within the ‘humoral’ theory. [He is credited with coining the terms ‘gas’, ‘chemistry’, and ‘alcohol’ and as  founder of the discipline of toxicology]. He was also interested the occult, astral forces, neoplatonism and interconnected forces.
During the sixteenth and seventeenth centuries, mummies were thought to have curative powers as mummified bodies were brought back from Egypt and Arabia. Paracelsus was amongst those who experimented with embalming bodies to use in medicines. However, one of the problems for physicians was how to obtain a corpse for research purposes. The bodies of executed prisoners were available to English physicians and their use less likely to cause a moral dilemma in society. From medieval to early-modern times, the sweat of a recently executed body was thought to be particularly potent, with curative powers. Similar beliefs existed (particularly in Scandinavia and Germany) in respect of the blood of a criminal corpse, though the practice of hanging in England made this less relevant here. Similarly, European beliefs included the hidden properties of the skull, as did skull moss and the teeth of an executed prisoner.
One tradition that survived the longest concerned the power of the human hand. The ‘Hand of Glory’ is a severed hand from an executed criminal that was dried and then pickled in salt and other chemicals to preserve it. The hand was then enclosed around a candle or the fingers turned into macabre wicks. It was believed that when it was lit, it could open doors and locks and put people into a deep sleep or paralyse them. In the south-east of England it was believed that the hand of a recently executed person was a cure for a goitre: a person suffering from that complaint could be led to the scaffold and the hand of the recently deceased placed upon the goitre. Ordinary people continued to believe in such cures, even though by the eighteenth century it had been ridiculed by the medical profession. 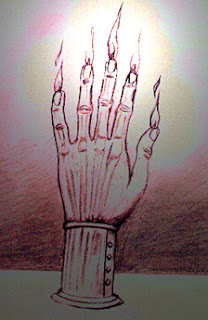 The gallows and the hangman were imbued with all sorts of magical and healing powers, so that people desired the hang man’s rope or splinters of wood from the gallows. The hangman was also imbued with magical powers so that the execution continued to be a public spectacle Davies referred to Thomas Hardy’s ghost story, ‘The Withered Arm’, [the central character Gertrude has mysterious marks on her arm which cause it to wither. She is told that that the only cure is to touch the neck of a newly hanged man which will ‘turn’ the blood and cure her withered arm. Gertrude visits the local hangman who agrees to help her and the story ends with Gertrude touching the neck of a recently hanged man].


William Harvey's research, through the dissection of animals, enabled him to understand the circulation of blood. [He revealed his findings at the College of Physicians in 1616, and in 1628 published Exercitatio Anatomica de Motu Cordis et Sanguinis in Animalibus 'An Anatomical Study of the Motion of the Heart and of the Blood in Animals']. Incremental changes in scientific and medical theory occurred during the eighteenth century, so that it moved on from the humoral theories.

I can’t remember if it was Ian Mortimer or Owen Davies whose contribution included a remedy for TB which involved the boiling of blind puppies, having first removed several internal organs (probably for some equally dire curative), and having the patient soak in the liquor produced. To ward off any chills from bathing the patient should first wrap the skin of a kid (as in goat) around the patient’s chest. Makes perfect sense!

If you have enjoyed reading this blog, please follow me using the link on right-hand panel.
Posted by C18thGirl at 15:30