The Tudor Group at Bayleaf farmhouse, Weald and Downland Museum. 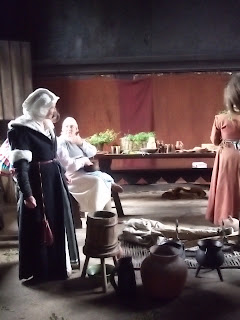 Clare Gittings (Education Department, National Portrait Gallery): ‘The bringing home of bell and burial: Funerals in Tudor and Stuart England’. This paper was presented at the Weald and Downland Museum (21-22 September 2013) where the line between life and death was demonstrated by the juxtaposition of displays at the Bayleaf farmhouse by ‘The Tudor Group’ http://www.tudorgroup.co.uk, covering Accidents, Injuries and First aid; the Apothecary’s Remedies; and Wills and Inventory Writing’.

Her paper covered the period following England’s conversion to the Protestant faith, when the ‘Catholic’, tri-partite relationship of heaven, hell and purgatory were simplified in the bi-partite relationship of heaven and hell. The belief was that the fate of the soul was determined at the point of death, although, that is not to say that all funeral tradition of the earlier period were lost and questions put at the Bishop’s Visitations included reference to the continuation of Catholic practices.

The sixteenth century witnessed a move to the secularisation of death: the first Protestant prayer book published in 1549 shortened the burial service and shortened even further in 1552 when communion was dropped from the funeral service. If the fate of the soul was already sealed, then religion played no part following death in redeeming the soul of the deceased. Nevertheless, social displays of wealth and rank continued to play a part and, even during the Civil War and Interregnum, ‘A New Directory for the Public Worship of God’ (1643-45) continued to advise that civil/social hierarchy should not be denied at death. In this period, death was both a domestic and parish affair.

On a practical level, women were responsible for washing and shrouding the body of the deceased. The Burial in Woollen Acts of 1667 & 1678 were attempts to protect the English wool trade, and required that all bodies should be buried in wool, with the exception of those who died from the plague. A £5 fine was imposed for burials which did not comply with the legislation, which was not repealed until 1814.
Funerals continued to be accompanied by rituals, even during the Interregnum, although some of the rituals changed over time. Coffins were covered in a black cloth during the procession to the church, although, at the funeral of a young virgin the coffin might be accompanied by girls dressed in white dresses, ‘bride burials’. Funerals were both a domestic and parish matter in which food played an important role after the funeral service and gifts might be given to close family members and/or servants, each aspect working to knit families and communities together. Before James I, the Heralds had a monopoly over funeral of the aristocracy where heraldry played an important role, both as a display of power and as a message that one powerful man would be replaced by another. Thereafter, funerals became much more about the relationship between the deceased and the bereaved.
Even during periods of plague, society did not break down and funeral rituals remained resilient and, Gittings asserts, the image of bodies dragged on hurdles and thrown into mass graves is not necessarily correct. As recorded in the diaries of  Samuel Pepys, people continued to attend funerals and pay their respects, even when warned to keep away by the female ‘searchers’, responsible for recording outbreaks of plague and for shutting up houses.
One particular aspect of Clare Gittings’ paper had particular resonance in the recent round of political party conferences. To paraphrase a memorable newspaper headline, 8-16 February 1587 was ‘a good week to bury bad news’.
Philip Sidney was an English poet, courtier and soldier, and one of the most prominent figures of the first Elizabethan age. In 1585, Queen Elizabeth appointed him governor of Flushing in the Netherlands. In 1587 Sidney took part in a skirmish against the Spanish and was wounded of a musket shot that shattered his thigh-bone. Sidney died from that wound, aged thirty-one, and his body was returned to England for burial.

In the meantime, after 19 years imprisonment, Mary Queen of Scots, a Catholic, was beheaded at Fotheringhay Castle on 8 February, 1587 for treason, through her complicity in a plot to murder Queen Elizabeth I. Religious and political tensions at this time are well known, and one might speculate that the Sidney's funeral was timed as a public distraction during the same week as the execution. Correspondence from the period between the Earl of Leicester and Sir Francis Walsingham, Sidney’s father-in-law, was concerned with the impending execution. (Correspondence of Robert Dudley).

Nevertheless, Sidney represented the epitome of an ideal courtier for many English people: he was learned (a poet), politic (MP for Kent), brave (a soldier), impulsive and a staunch Protestant. His funeral procession in London on 16 February 1587 was one of the most elaborate ever staged.
The funeral of Sir Philip Sidney, 1587 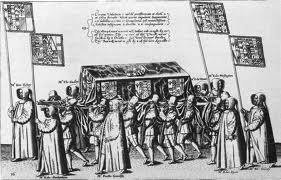 Papers presented at the conference did not address burial rites during the Georgian period, therefore, I offer a small insight into the continuing importance of the funeral rites during that period, which was no more apparent that at a pauper funeral. Parish records often include a record of the provision of money, both for the funeral and the provision of food and drink following it. Overseers' accounts for the parish of Thames Ditton, Surrey, 6 December 1719, record disbursements in respect of rental payments for the widow and the burial and wake of Edward Tod:

Similarly, on 1 April 1722 their accounts record payments in respect of the care, keep, burial and wake of elderly resident, Edward Sims:

Next: Victorian rituals and burials.