Dr Helen Frisby spoke on: ‘Bidding, Baking and Waking: the Moral Economy of the Nineteenth Century Folk Funeral’. This final paper on mortality was presented at the Weald and Downland Museum (21-22 September 2013), highlighting the continuity between the Medieval, Early Modern and Victorian periods, in terms of funereal practices. It contrasted rituals during those periods with practices post the mid-twentieth century and the sequestration of death to outside bodies, the hospital, hospice and chapel of rest.
Apparently, there was a belief that the presence of feathers could hold death back, possibly connected to the idea of winged angels, therefore, pigeons might be brought in to the sickroom. The idea that the transition between life and death could be managed was a Protestant one, however, when death occurred windows would be opened so that the soul could escape the body and ascend to heaven. In some houses, the locks were opened on the doors of any doors or cupboards in the house. Fires were extinguished, curtains drawn, clocks stopped, mirrors covered with crape to prevent the deceased’s spirit from getting trapped in the looking glass. The body was watched over every minute until burial, that period being the ‘wake’. The wake served as a safeguard from burying someone who was not dead, and lasted about 3 to 4 days, which also allowed time for relatives to arrive. While candles were traditionally placed around the corpse to ward off evil spirits, the use of flowers and candles also helped to mask unpleasant odours in the room.
The transition from this life to the next one was assisted by the tolling of the death bell to frighten away evil spirits, prayers were summoned to assist the soul, a ‘penny for St Peter’ was placed on the eyes of the deceased, a saucer of salt might be placed near the body, to help fight off decomposition and/or keep the devil away.
In presenting her paper on Victorian funereal traditions, Frisby drew on E.P. Thompson’s, 'The Making of the English Working Classes', in which he proposed that the nineteenth-century working classes appropriated traditional popular culture in order to construct and assert their own class identity against that of the bourgeoisie. 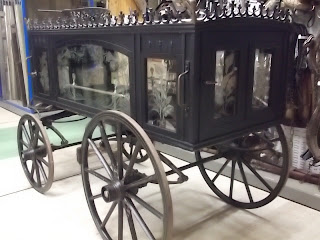 This hearse was built in 1897 by Kemps of Hawhurst in Kent, partly to commemorate Queen Victoria’s Diamond Jubilee. Is was designed to be either hand-drawn or pulled by a small horse or pony. If the village pony was required, however, the undertaker had to wait until it had finished the milk round. The hearse was purchased by Northiam Parish from the Kemps for £35. The parish then rented the hearse to whichever undertaker or individual required it.

Visiting the home of the deceased to pay ones last respects was an opportunity to share memories and legitimise grief and the tradition of touching or kissing the corpse was supposed to prevent to mourner from being haunted by the deceased. ‘Bidding’ concerned the bringing of neighbours to a funeral with specially baked funeral biscuits and to attend the wake where gifts were exchanged. Far from merely being a waste of economic resources, funerary customs performed an important function in consolidating and, sometimes, contesting social relations between the bereaved.

Paper wrapper used to contain biscuits given to a mourner at the funeral of Mrs Oliver of Cleveland, Yorkshire, 7 November 1828, Pitt Rivers Museum, Oxford. 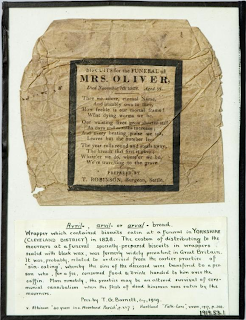 Birth and death are universal human experiences and the three papers presented on the subject of mortality highlight the longevity of funereal practices.

If you have enjoyed reading this blog, please follow me using the link on right-hand panel.
Posted by C18thGirl at 15:03