Natasha Powers, Head of Osteology and Research Co-ordinator at Museum of London Archaeology, presented a paper, ‘Written in our bones?’ Her talk focussed on three sites in the London Borough of Tower Hamlets, excavated between 2004 and 2010, where groups of Baptists, Roman Catholics and Nonconformists were buried between 1820 and 1854. It is possible to extract evidence of health and disease in the nineteenth century from human remains that we can't get from documentary sources. Acute diseased, such as the plague, are not discernible from the processes used: DNA testing would provide such evidence but is currently too expensive for large sample testing. However, a mass burial does provide evidence of an epidemic.

The burial site at the Catholic Mission of St Mary and St Michael was only used for eleven years. Many of the graves were for Irish immigrants who arrived during the period of the Irish famine (1845-1852). Many bodies found appear to have been dressed in their ‘Sunday best’ and buried in stacks over a wide time-frame (from coffin plates), in graves up to 4 metres deep. It appears that 62 per cent of the bodies are of sub-adults, with the peak of deaths in the one year age group.
From nicotine on men’s teeth it is possible to tell that one-quarter of men smoked a clay pipe. The same men had a lower average age at death that non-smokers, while lesions on the rib cage indicate that the smokers had a higher than average rate of chest infections. This information provides evidence of health but not the cause of death. The introduction of refined sugars was another factor in reducing dental health of the population. Dental plates for the rich were available from the mid-eighteenth century and were made from ivory and human teeth and springs were attached to the plates to keep them in place, although they would have been very uncomfortable. 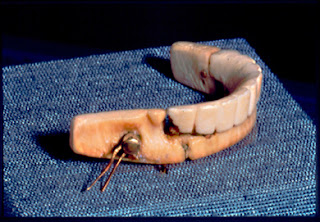 
Child health is also reflected in dental records. One-third of children suffered from ‘Bottle Caries’, i.e., severe tooth decay in infants or young children caused by bacteria found on a bottle or comforter held in the mouth. Children of all classes were put with wet nurses, some of whom would have been given milk substitutes. In addition, because babies were ‘swaddled’ and kept out of the light to avoid them looking like peasants, many children suffered from rickets through vitamin D deficiency (lack of exposure to sunlight/ultraviolet light). Rickets caused bones to soften and mineralise, so that the body weight caused the bones in the legs to bow. There was no sign of rickets in the adult remains, which raises questions as to whether any children survived to adulthood in. this community who suffered from the disease. [The discovery of vitamin D and the identification of the properties of cod-liver oil in the prevention and treatment of rickets by the 1930s made it possible to treat children]. However, the cemetery in Bow showed a high death rate at birth, in which case the process of birth was the greatest risk for infants.
Unclaimed bodies were found in graves at the London Hospital, Whitechapel, where bodies were used for dissection and anatomy. However, when Sir William Blizzard opened the medical school he gave instructions for the burial of remains in coffins with proper east/west burial traditions. Although patients with syphilis were banned from general hospitals, the London Lock Hospital [opened 31 January 1747] was the first venereal disease clinic and the first of the Lock Hospitals developed for the treatment of syphilis. The disease might not be detected until between 2 and 10 years after infection. It went through 3 stages in which the tertiary stage caused skeletal changes which are evident in the corpses found. 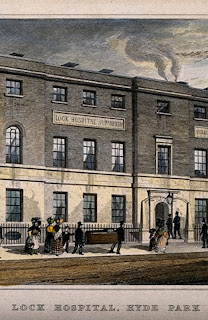 This is the last of six blogs in which I hope to have given a flavour of the topics covered at the conference on Medicine and Mortality.

If you have enjoyed reading this blog, please follow me using the link on right-hand panel.
Posted by C18thGirl at 12:48