The subject of medicine was covered in three interesting papers, covering: ‘The Time Traveller's Guide to Fatal Illnesses, 1348-1798’ (Ian Mortimer, amongst many other things, Fellow of the Royal Historical Society, and recipient of the Alexander Prize (2004) for his work on the social history of medicine); ‘Healing traditions, 1700-1900’ (Professor Owen Davies, University of Hertfordshire); and ‘Written in our bones?’, what we can learn from archaeology and skeletal remains (Natasha Powers, Head of Osteology and Research Co-ordinator at Museum of London Archaeology).

‘The Time Traveller's Guide to Fatal Illnesses, 1348-1798’: Ian Mortimer, amongst many other things, is a Fellow of the Royal Historical Society, and recipient of the Alexander Prize (2004) for his work on the social history of medicine. His is a particularly entertaining speaker and well worth hearing when the next opportunity arises.

‘If you were ever offered the chance to visit the past, you should decline on medical grounds’. (Mortimer)

Mortimer discussed the range of truly terrible diseases to be caught from such a journey, beginning with the plague years of 1348-1665; sixteenth-century epidemics that struck England, such as the sweating sickness, influenza, smallpox; and the introduction of syphilis (French pox) to the country. Mortimer described the symptoms of such diseases; considered how society reacted when epidemic took hold; and who was available to offer help. He discussed medical issues that have persisted throughout history, such as complications in childbirth, and how responses changed from a time of almost complete incapability to one of strategic and positive action. Mortimer examined ways in which the landscape of human illness has altered over time, showing how both medicine and the diseases themselves were subject to change.

In 1179 the third Lateran Council forbad clerics from drawing blood, even though they were the most educated men in society, which would have an adverse effect on advances in medical knowledge during this period. Had members of the church ben able to ‘cut’ it is more likely that ideas on the cleanliness of wounds would have been better understood through the dissemination of knowledge amongst the literate few. Arabic medicine was ahead of us and their knowledge travelled into southern Spain during the ninth and tenth centuries. Only in the twelfth century did it permeate to Western Europe, when translated into Latin.
Before the plague reached England in 1348 the most feared disease was leprosy (Hansen's disease). Its cause was misunderstood, since there was a 3-5 year incubation period, and it was believed to be a venereal disease. There was no known cure and lepers were banished to isolation houses and towns. No physician would help a person with leprosy during the fourteenth century and, even if they had been willing, there were only about 12-24 trained physicians in the country. Most people relied on the assistance of barber surgeons or older/experienced women in the community. Mortimer estimates that between 10 and 20 per cent of medical remedies depended on ground-up animal parts, while blood-letting was used as both a cure and a preventative course of treatment.

Another ‘killer’ was tuberculosis (TB). It was mistakenly believed that those who suffered from TB were immune from leprosy. TB was transmitted by spittle and could remain active in dust particles for weeks. Also known as ‘scrofula’ or ‘consumption’, TB was believed to be curable by the laying-on of the King’s hand.

Galenic theories of the four humours and corresponding temperaments were still relevant, with no understanding of germ theory. [Galen, AD 129– c. 200/ c. 216]. 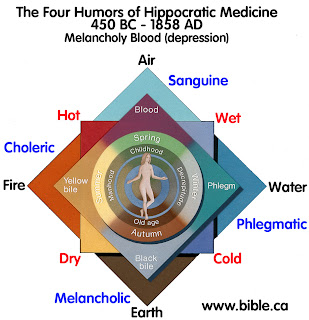 It is almost impossible to imagine the impact of the plague in 1348. It is estimated that 35% of the population died over a seven month period, although that figure is being revised upwards through more recent research. It is possible that, in some areas, between 50 and 62 per cent of the population died, i.e., a mortality-rate 150 times greater than during the Second World War. As a result, people had to think differently about ‘divine punishment’. The King of France ordered a commission to discover the cause of the plague, although it was not unto 1814 that the cause was identified. There are two type of plague, Pneumonic and Bubonic. It was the former that struck in 1348, it had an incubation period of between 1-6 days and death followed between 1-2 days after the onset of the symptoms. As Mortimer observed, that society did not break down at this time is a tribute to the resilience and co-operation of the people that remained.

With no understanding of the importance of good sanitation, dysentery or flux, was a common killer. It is estimated that of the 15,000 men present at Agincourt, 2,500 died of dysentery – and they were only there a month! Even in normal circumstances, life expectancy during the medieval period was 21 years. Of those who reached their 21st birthday there was a 50 per cent chance of reaching 40 years of age and a 20 per cent of getting to age 60.
Medical practice had fundamentally changed by the Tudor/Stuart period. Before 1512, the licensing of physicians and surgeons was under the control of the bishops. Although the pursuit of religious and medical knowledge was interlinked, during this period more scientific attitudes developed. In 1518 the College of Physicians was created in the City of London and in 1523 across the whole country. By 1600 the majority of physicians qualified from colleges in Oxford, Cambridge and Leiden. At the same time, advances in printing allowed the circulation and application of new ideas. From the 1530’s Italian publications appeared on subjects such as syphilis, disease, contagion and ideas on infection of the plague through the air, fomites and by direct means, although not necessarily applied to other diseases.
Nevertheless, in 1563 17,000 people in London (one-quarter of its population) died of the plague, while, this age of exploration introduced new diseased; the last indigenous case of leprosy in the British Isles was recorded in 1798; and TB killed on average 1 in 5 people in towns.
Sweating sickness was a strange illness which came to this country with Henry VII, with recorded outbreaks in 1485, 1502, 1517, 1552 and never heard of again. When it struck there was a 30 to 50 per cent mortality rate. By the 1500’s, syphilis had also reached Britain. People understood how it was transferred but one strain of the disease at this period could kill within a few weeks of infection. Overtime its virulence slowed down. As with a number of diseases, treatment for syphilis involved mercury. It was thought to be an effective, if dangerous, treatment and mercury might be applied through bathing in it, ingesting it, or inserting it through one or other of the human orifices.
Influenza first appeared on these shore by 1550, with a severe outbreak between 1557 and 1559 which killed between 1 in 12 of the population.
Typhus (gaol fever) had probably existed in earlier times but metamorphosed over time, so that by 1577 an outbreak of typhus at the Oxford Assizes killed over 300 people, including Sir Robert Bell, Lord Chief Baron of the Exchequer.  [I should also mention that typhus caused the death of the Lord Chief Baron, High Sheriff, sergeant, and hundreds of others at the Lent Assizes for Taunton in 1730]. The suggested treatment for typhus in 1617 advocated by physician, John Hall (son-in-law of William Shakespeare), was an emetic infusion using laudanum to induce a series of 12 vomits.
It is estimated that by 1680, 55 per cent of the population paid for medical help. This shift in the medicalization society by the end of the seventeenth century was due to advancements in medicines prescribed by physicians and dispensed by apothecaries. Mortimer went on to discuss problems in childbirth and advancements in safe delivery with the introduction of forceps by the Chamberlen family, discussed in one of my earlier blogs: http://c18thgirl.blogspot.co.uk/2013/09/part-2-man-midwives-and-use-of-forceps.html.


Malaria became the biggest killer in world history. During the seventeenth century there were outbreaks in Kent, Lincolnshire, Essex and Norfolk. In the 1630’s it was discovered that Jesuit or Peruvian bark produced an effective treatment by the extraction of quinine, which was first marketed in the UK in 1658 and used successfully to treat Charles II. In this country the eradication of malaria was achieved through land drainage schemes. [There is an interesting link to the search for the discovery of a cheaper/synthetic form of quinine and the discovery of an effective purple/mauve dye in the last programme in the recent series, Science Britannica:
http://www.bbc.co.uk/iplayer/episode/b03c8mn1/Science_Britannica_Clear_Blue_Skies/]

Small pox is another example of a disease which changed over time. In 1561 a small pox epidemic (variola minor) killed about 30 per cent of those affected and left its survivors scarred. By 1630 it had changed to the more dangerous strain of variola major and after 1655 it took the place of the plague as the most feared epidemic. In 1717 Lady Wortley Montagu (wife of the British ambassador in Turkey) noted the local practice in Constantinople of deliberately stimulating a mild form of the disease through inoculation, which conferred immunity. Lady Montagu persuaded Princess Caroline to test the treatment. [ I additionally mention in this connection that seven condemned prisoners awaiting execution were offered the chance to test the inoculation procedure: they all survived and were released. Six orphan children were also inoculated and they all survived]. In 1722 King George I allowed Princess Caroline to have her two children inoculated. In 1798 Edward Jenner was able to convince the Royal Society of the effectiveness of a serum he created from cattle (cow pox) and which could be used successfully on humans.

Whooping cough and measles were killer diseases in childhood: third- and fourth- century records from Rome describe a series of serious outbreaks of measles. [Unfortunately, measles is making an unwelcome return to the UK following ungrounded concerns on vaccine safety].
For everyday pains, people with money relied on opium (imported since the mid-fourteenth century) as a form of pain relief: the poor relied on wine. I’m off for a glass of wine having transcribed my notes: somehow Ian Mortimer covered all this in a 45 minute talk: I only hope I have reported his paper accurately.

If you have enjoyed reading this blog, please follow me using the link on right-hand panel.
Posted by C18thGirl at 11:15