October's Writer of the Month, The National Archives: Dr Kathleen Chater, 'Researching Untold Histories: Black people in England and Wales during the period of the British slave trade, c.1660-1807'.

Dr Chater's use of the term ‘black people’ included people of both African and Asian origin, since no distinctions are made in the records.

A brief history of slavery and the UK:
·         1562-1567 Captain John Hawkins made three slave trading journeys to Africa. [He captured over 1200 Africans and sold them as goods in the Spanish colonies in the Americas].
·         1600–1858 East India Company chartered by Queen Elizabeth I for trade with Asia.
·         1606-1775 Poor, native, Scots could be bound in service during their lives, fixed to their places of employment, and sold with the works to which they belonged, while a large number were sent to the colonies, often against their will.
·         1618-1672 a number of companies were formed to trade with Africa.
·         1672-1698 Royal African Company was formed to undertake the English slave trade. It was formed under a royal charter and gave a monopoly to the port of London.
·         1765 Granville Sharp’s interest in slavery began after he befriended Jonathan Strong, a slave who had been badly beaten by his master. Sharp took a successful case to the lord mayor and Strong was freed.
·         1772 ruling by Lord Chief Justice William Mansfield concluded that slave owners could not legally force slaves to return to the colonies once they were in England, since slavery was not permitted under English law. 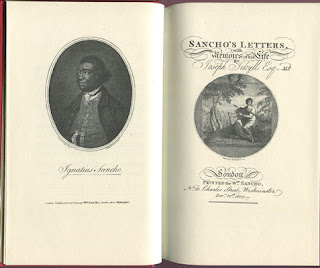 Jekyll. J. Letters of the late Ignatius Sancho. - An African to which are prefixed Memoirs of his life, Dawsons of Pall Mall: London (1968).

Famous black men included Gustavus Vassa (1745-1797) a prominent African involved in the British movement for the abolition of the slave trade; Ignatius Sancho (c. 1729 – 1780) a composer, actor, and writer; and Francis Barber(1735-1801) a slave who became a businessmen and teacher. Early references to ‘ordinary’ black people in England appear in works of art and literature, such as Hogarth’s illustrations and the diary of Samuel Pepys. Dr Chater’s interest is in the more mundane lives of ordinary people.

Dr Chater comes to this subject with a background as a researcher for the BBC and genealogist, and those influences came through quite strongly. She posed the question, ‘What was life like for the ‘average’ black person in England?’ To which she gave the answer that most were quietly getting on with their lives, working, getting married, raising families and taking part in similar every day activities. She challenged a 1970’s style, Marxist, view which, she stated, commonly made negative assumptions about the lives of black people in England during the period of the British slave trade. She argued that while academics take a view and find individuals who illustrate it, as a researcher, she prefers to find the individuals first and see what view that illustrates.
I took the point she was trying to make, that some black people led ordinary lives in England and were integrated in their communities. However, the examples she gave to support her argument seemed naive. She asserted that finding evidence of black people in the records is difficult because colour was not important. For example, settlement records refer to the colour of a person’s skin, not because colour was relevant, but as evidence that a person was an incomer to a community and not entitled to benefit from the poor laws in that parish. She then argued that when a person gained settlement through employment, etc., colour was no longer relevant to the community and is no longer mentioned. In another example, she asserted that a black man working as a greengrocer in Clapham, home of many abolitionists, was ‘happy’ in that community. Another black man who left a significant sum of money in his will, in excess of that left by her upholster ancestor, must have been ‘happy with his lot’. Dr Chater appeared to suggest that the fact that black men and women married, had children (not necessarily with partners of the same colour), dispersed to all parts of the country, and produced a long line of descendants, was evidence of their being integrated and accepted in society. Likewise, she offered the evidence of a black man who died in suspicious circumstances as the subject of a coroner’s inquest, and the presence of black men and women as defendants, prosecutors and witnesses in the law courts, as evidence that they were ‘treated’ the same as white people in the community.  She gave the example of Captain John Sutherland, commander of a British armed transport ship, who killed his cabin-boy in 1801 and was convicted on the evidence of a black witness.
Dr Chater’s thesis question was, ‘What was life like for the average black person in England and Wales during the period of the British Slave Trade?’ Anyone who has worked with the media will be aware of pressure on researchers to give an opinion about ‘what people felt’. I would argue that it is not possible to ‘know’ what any black person felt about the position they found themselves in, or how those they lived with felt about them. Feelings and emotions cannot be assumed, whatever the class or colour of the person appearing in the record books, unless they left a diary or letters behind which expresses their views.
I have to confess that I haven’t read Dr Chater’s published works on this subject and it is possible that she articulates her arguments more clearly there.
Her PhD thesis is published as: Untold Histories: Black People in England and Wales during the period of the British slave trade c. 1660-1812 (Manchester University Press, 2009).
She recommended: Peter Fryer, Staying Power. The History of Black People in Britain (Pluto Press, 1984).

If you have enjoyed reading this blog, please follow me using the link on right-hand panel.
Posted by C18thGirl at 10:37