On Friday, 1 November, I was fortunate to attend Dr Ian Williams’ lecture at the IALS on the subject of the role of readings and text in legal scholarship during the early-modern period. Dr William’s research interests, according to his UCL profile, are in early-modern English legal history (c.1500-c.1640) and the history of common-law reasoning and its interaction with legal theory. On this occasion, his paper focused on ‘readings’ in the Inns of Court as a source for understanding lawyers’ legal and political thought.

The history of early legal education begins in the 12th and 13th centuries, when law was taught primarily by members of the clergy in the City of London. However, on 2 December 1234, a decree by Henry III prohibited the clergy from teaching the common law, limiting their role to cannon law. As a result, legal education moved to nearby Holborn. 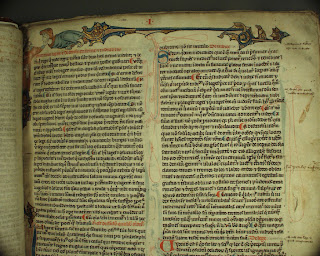 Image: Incipit of HLS MS 1, Bracton's De legibus et consuetudinibus Angliae. Manuscript on vellum, written about 1300, probably at Worcester. This copy is corrected and annotated in a contemporary hand and contains numerous citations to cases brought from Devon during the reign of Edward I (1272-1307). http://bracton.law.harvard.edu/ManuscriptEdPage.htm

Devon born, Henry of Bratton was an English judge of the Coram Rege (later King's Bench) from 1247-1250 and again from 1253-1257. His manuscripts appears to be unfinished, possibly due to the fact that Bracton was ordered to surrender the judicial records he had been using when he ceased to be a member of the Coram Rege.

By the mid-13th century, manuals and books were produced in Court-French rather than Latin, which would have limited circulation. However, having obtained a placement in a set of barristers' chambers, trainee barristers were trained in court procedure and advocacy by attending and listening to arguments in the royal law courts during the four legal terms. In order to develop their knowledge of substantive law, students were expected to keep the two vacations, at Easter and in the summer, by attending readings on individual legal statutes. By the Elizabethan period readings were given and moots took place on a regular basis and barristers who had been called to the Bar were expected to play a part in teaching students.

From the Middle Ages, the Inns of Chancery, offered training in the writing and employment of writs and other procedures in use in the common law courts. These minor Inns were later subsumed within the four Inns of Court we see today, as follows: 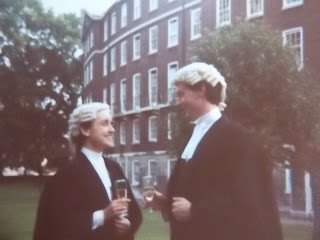 Image: A happy female student (and friend) on her call to the Bar, Trinity Term, 1982: grounds of The Middle Temple.
While the oral scholarship of ‘reading’ would have inspired later written scholarship, it is inevitably a difficult area to research, and relies on references to unpublished readings by earlier jurists. For example, the first volume of Edward Coke's work Institutes of the Lawes of England (1628), known as Coke on Littleton, is ostensibly a commentary on  Sir Thomas Littleton’s On Tenures (1481). Dr Williams observed that commentaries from the Elizabethan period on Littleton may have provided an opportunity to produce in text that which was earlier published through oral readings and recorded in personal manuscripts, such as 17th century jurist, William Fleetwood’s, ‘Observacons sur Littleton’. 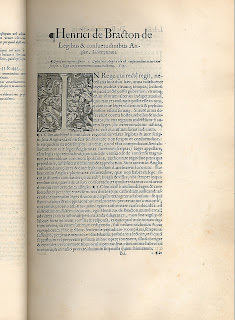 Each Inn was a closed society and the circulation of legal scholarship was generally limited to those who were members of the same Inn. Only members and special invitees could attend readings, making oral readings a valuable text. Surviving manuscripts based on readings tend to have been compiled by specialist scribes employed by private individuals, for their personal use (at about 7½ d per page), whereas law reports were produced commercially by general scribes (at about 1d per page).
Dr Williams’ evidence on the limited access to written recordings of readings included the example of Henry Sherfield. Sherfield’s notes on his readings in Lincoln’s Inn were lent to only four other lawyers in the decade after they were delivered in 1631. Three recipients were fellow members of Lincoln’s Inn, including the puritan, William Prynne. The fourth recipient was [Richard?] Townsend, who was not a member of the Inn and only permitted to receive the manuscript by asking Sherfield directly for a copy, as no copies were publicly available. Terms imposed on Townsend were that the manuscripts were kept safely; returned safely; and that they were not defaced. When the records were handed over, Sherfield made a note of the exchange in his account book and had the entry witnessed by two people. Likewise, when Matthew Hale died in 1676, his will included instructions that his manuscripts should be given to Lincoln’s Inn and to be lent only to members of the Inn.
Dr Williams observed that some pieces of written text may have been the result of patronage, or an attempt to obtain patronage, rather than a trend towards disseminating written text to a wider audience. He gave the example of James Morris [?] and Sir William Cecil, in which Morris (at Cecil’s request) sent an edited version of his reading on the ‘royal prerogative’ to Cecil, who in turn edited the text to suit his own ends. [Any comments and sources on Cecil and Morris would be appreciated]. Similarly, during the 1580’s, Edward Coke represented the Howard family, Dukes of Norfolk, and some of his manuscripts were commissioned by them.
Readings on the common law and statute laws, delivered in the different Inns of Court, frequently received the sanction of senior lawyers. Sir Edward Coke lamented that this custom was falling into disuse:
Here, it is to be observed, of what authority ancient Lectures, or readings upon the
statutes were, for they had five excellent qualities. First, they declared what the common law was before the making of the statute. Secondly, they opened the true sense and meaning of the statute. Thirdly, their cases were brief, having, at the most, one point upon the common law, and another upon the statute. Fourthly, plain and perspicuous; for, then, the honour of the reader was to excel others in authorities, arguments, and reasons, for proof of his opinion, and confutation of the objections against it. And fifthly, they read to suppress subtle inventions to creep out of the statute. But now readings have lost the said former qualities, have lost also their former authorities: for now the cases are long, obscure, and intricate, full of new conceits, like rather to riddles than lectures, which, when they are opened, they vanish away like smoke.
Source: The Law Journal for 1804: Consisting of Original Communications on Legal Subjects, Opinions of Counsel, Account and Analysis of New Law Books, Ancient Readings; Memoir on the manuscript of Lord Coke’s Commentary upon Littleton, Lincoln’s Inn: W. Clarke and Sons.
Dr Williams suggested that the advantage of different readings on the statutes discussed within the separate Inns allowed for wider debate before a judge, when different interpretations on the statutes were presented, allowing judges to ‘make’ or state’ the law on declaring their decision. One law report contains the words: “I have heard the views of the Middle Temple”. Another: “We will never reach that decision until all four judges are form the Inner Temple”.

In terms of written material, some of the notable works of the Early Modern Period (in chronological order) are as follows:

Henry Bracton directed that it was only through the examination of a combination of action and intention that the commission of a criminal act could be established. Modern day Bractons should attend the IALS seminar on 21 November 2013 ‘Historicising Criminal Responsibility: Mapping the Legal and Scholarly Terrain’ to be given by Dr Arlie Loughnan, Faculty of Law, University of Sydney.
If you have enjoyed reading this blog, please follow me by clicking on the link in the right-hand panel.
Posted by C18thGirl at 14:25