Gambling: a past-time of the rich, a vice of the poor.

Following the restoration of the monarchy in England in 1660, ‘vices’ supressed under the Commonwealth were allowed to resurface and flourish, with London leading the way. In 1684, Sir Thomas Neale (1641–1699) gambler and entrepreneur, responsible for the supervision of gaming at court, was appointed by Charles II to oversee gambling in London. His duties included settling disputes at gaming tables and shutting down illegal gambling houses. Neale was variously M.P. for Petersfield, Ludgershall and Stockbridge, Master of the Mint and the Transfer Office, and the first person to hold a position equivalent to postmaster-general of the North American colonies. As groom porter to Charles II, James II and William III, Neale’s interest gaming led him to devise ‘a new sort of table to be played on with balls’, and a dice, known as ‘the mathematics’, intended to eliminate cheating.[1] 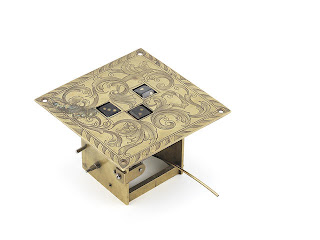 Gaming continued to be a matter of concern into the eighteenth century and, while gaming among politicians and aristocrats was criticised, it was not as much of a concern as gaming among the poor. Concerns about the relationship between vice and the working poor are illustrated in Admiralty records, ADM 106/1043/19, 11 April 1747: 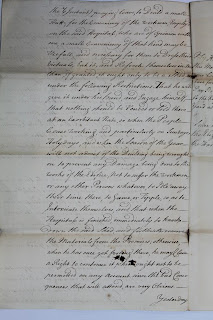 Commissioner Richard Hughes, Portsmouth, gives … leave to Build a small hut, for the convening of workmen, employ’d on the said [Gosport] Hospital, who are of opinion with me, a small conveniency of that kind, maybe useful and necessary  for them to Dress their victuals, eat it, refresh themselves in: But than, if granted, it ought only to be a shed, under the following Restrictions ... not to suffer the workmen, or any other Persons whatever, to  idle away their time there, to game, or tipple, so as to Intoxicate themselves …


In 1749 magistrate and novelist, Henry Fielding, expressed a similar view on the desirability of controlling vice amongst the working poor: ‘to prevent Gaming among the lower Sort of People is principally the Business of Society … because they are the most useful Members of the Society; which by such means will lose the benefit of their Labour.’ The consequence of gambling for the ‘Rich and Great’, wrote Fielding, was ‘generally no other than the Exchange of Property from the Hands of a Fool into those of a Sharper, who is, perhaps, the more worthy of the two to enjoy it.’[3]


While gambling and gin were considered the main ‘vices’ of eighteenth-century London, it should not be imagined that illegal gambling dens were the preserve of the poor, although there was a distinction between gambling clubs known as ‘hells’ and gambling slums known as ‘lower hells’. 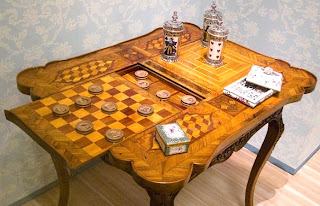 Table from around 1750 has a backgammon board under a chess/checkers/draughts board, and nine men's morris at the other end. Probably German.[4]


In 1745, Lady Mordington and Lady Mary Cassillis tried to use privilege of title to prevent their illegal gambling houses from being shut down. Local officials trying to enforce the gaming laws provided the House of Lords with a letter from Lady Mordington in which she asserted that all of the employees of her Covent Garden gaming house were ‘domestic servant’ and demanded ‘all those Privileges as belong to me, as a Peeress of Great Britain’.[5]


Extracts from the Journals of the House of Lords and State Papers, April 1745:
Claims of Privilege of Peerage, to prevent Gaming Houses being suppressed.[6]

Justices of Peace were called in and, at the Bar, severally gave an Account, ‘That Claims of Privilege of Peerage were made, and insisted on, by the Ladies Mordington and Cassillis, in order to intimidate the Peace officers from doing their Duty, in suppressing the public Gaming-houses kept by the said Ladies.’

SP 36/65, f, 157, 8 April 1745: Affidavit of John Mangar and Samuel Barnes, constables, of the parish of St Paul, Covent Garden, Westminster, on the ‘notorious common gaming houses’ kept in the parish by Ladies Mordington and Cassillis; the officers being reluctant to take any action while it was possible that those involved could claim exemption from the law as peeresses of the realm.

SP 36/65, f. 159, 8 April 1745: Affidavit of Daniel Carne, high constable of Westminster relating to the claims of Lady Cassillis that as a peeress of the realm she had a right to keep a common gaming house and to protect those frequenting it, being exempted from the jurisdiction of the justices of the peace.

SP 36/65, f. 217, 17 April 1745: Order of Westminster quarter sessions for the chairman to present an account to the Duke of Newcastle, Secretary of State, of all their actions in apprehending street robbers and vagrants, and with regard to the gaming houses kept by Ladies Mordington and Cassillis.


And the said Burdus thereupon delivered in an Instrument in Writing, under the Hand of the said Lady Mordington, containing the Claim she made of Privilege, for her Officers and Servants employed by her in her said Gaming-house.

And then they were directed to withdraw.


And the said Instrument was read, as follows:

I, Dame Mary Baroness of Mordington, do hold a House in the Great Piazza, Covent Garden, for and as an Assembly; where all Persons of Credit are at Liberty to frequent, and play at such Diversions as are used at other Assemblies. And I have hired Joseph Dewberry, William Horsely, Ham Cropper, and George Sanders, as my Servants or Managers (under me) thereof. I have given them Orders to direct the Management of the other inferior Servants; (namely,)John Bright, Richard Davies, John Hill, John Vandenvoren, as Box-keepers, Gilbert Richardson Housekeeper, John Chaplain Regulator, William Stanley and Henry Huggins Servants that wait on the Company at the said Assembly, William Penny and Joseph Penny as Porters thereof.
And all the above mentioned Persons I claim, as my domestic Servants; and demand all those    Privileges as belong to me, as a Peeress of Great Britain, appertaining to my said Assembly.


The Lords were unimpressed and resolved on 29 April 1745 as follows:
Resolved and Declared, That no Person is entitled to Privilege of Peerage, against any Prosecution or Proceeding for keeping any Public or Common Gaming House, or any House, Room, or Place, for playing at any Game or Games prohibited by any Law now in Force. 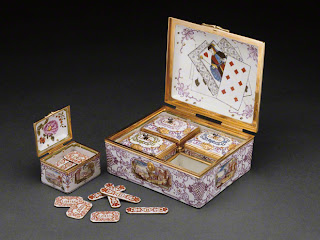 Box Set of Gaming Pieces (Boîte de jeu), Austrian (Vienna), about 1735–40, Du Paquier Porcelain Manufactory, hard-paste porcelain, polychrome enamel decoration, gilding; gold mounts; diamonds.[7]
In his ‘Inquiry into the Causes of the late Increase of Robbers’ (1750) Henry Fielding recommend the introduction of repressive measures in the control of alcohol, gaming and the movements of vagrants, as a means of overcoming ‘the excessive leniency’ of prosecutors, juries and judges who were reluctant to convict and punish those accused of any one of an increasing number of capital offences. In the same year, George II called upon the House of Commons to consider measures ‘for enforcing the Execution of the Laws; and for suppressing those outrages and Violences, which are inconsistent with all good Order and Government; and endanger the Lives and Properties of my subjects’.[8]  In the following year (1751) he spoke of the need ‘to suppress those audacious Crimes of Robbery and Violence, which are now become so frequent, especially about this great Capital, and which have proceeded in a great Measure from that profligate Spirit of Irreligion, Idleness, Gaming, and Extravagance’.[9]

Nevertheless,despite public concerns about the vice of gambling, particularly in the area around Covent Garden, in 1870, ‘King Street’, Covent Garden, was renamed ‘Neal Street’ after the aforementioned Sir Thomas Neale. 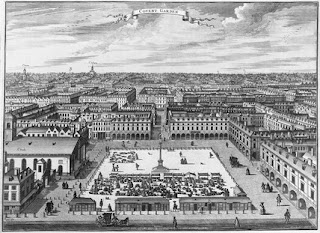 Links between gambling and excessive drinking, aggravated by the poor example set by members of the aristocracy, are highlighted in this article from The Leeds Mercury, 8 November 1763, on drinking races in public houses:

In however ridiculous a Light we might view the fashionable tho’ too prevailing Custom of Gambling among the Great, it had little Effect upon us while confined to Newmarket, and other Places of public Resort; but we are sorry to observe, that it is not only making its Way with long Strides into this manufacturing Part of the Country, but is so degenerated withal, that Wagers are now laid, even among Men ‘who call themselves Christians’, which of them shall soonest drown their Reason, and become Beasts.


250 years later, governments are still trying to get to grips with the same problems:
[M]echanisms proposed in the alcohol field, such as restricting the availability of alcohol, tightening marketing rules, and providing tougher measures to protect the young, may be equally effective in curtailing problematic gambling …Without the necessary restrictions, there is a real danger that this will be matched in future by more people suffering alcohol and gambling problems. Mark Leyshon, policy officer for Alcohol Concern Cymru, 21 February 2013.[10]