Locating and selecting primary sources on the History of Crime.

When I embarked on my PhD I was already aware that a substantial body of legal documents survive from the eighteenth century for Yorkshire which is held in The National Archives (TNA) in Kew. I selected the two sample periods (1735-1745 and 1765-1775) which shared similar experiences, each commencing with a period of peace, followed by a period of dearth, and ending with the country being involved in hostilities overseas. On a practical level, I consciously avoided potential difficulties with pre-1733 legal records written in Latin.
Official statistics of indictable crimes were not collected centrally until 1805: therefore, evidence of the work of the assizes has to be collated from surviving records in the TNA ASSI series. Preliminary evidence of a crime was gathered by local magistrates in the form of written examinations of the accused and deposition statements taken from complainants and witnesses. A substantial body of written examination and deposition statements from Yorkshire survive in ASSI 45. Depositions are not wholly neutral documents, nevertheless, they are a useful source for discovering the details of the crimes alleged and provide evidence of the detection of the crime, the circumstances of the detention of the suspect and any pre-trial confession by an accused.
The examination of Joseph Fearn, ASSI 45/24/1 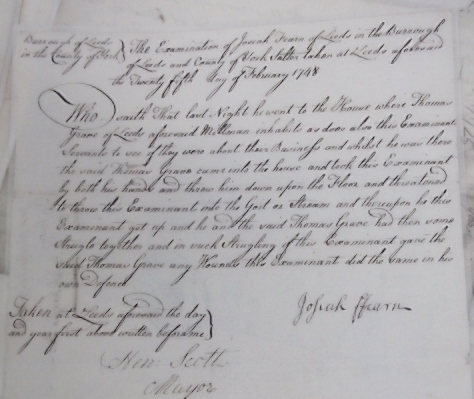 ASSI 44 includes copies of indictments (short descriptions of each alleged crime, its perpetrator and victim) presented to the Yorkshire assizes, together with lists of justices of the peace and jurors, recognizances (sureties), gaol calendars (records), and coroners' inquisitions. While the chronological run of the series is substantially complete, some of the documents are in poor physical condition and others have become detached from the correct bundles. It should be noted that the records of surviving indictments are not necessarily complete because of an instruction to court clerks that were meant to ‘rent into pieces’ or permanently deface all bills that were dismissed during the committal process by a grand jury. The bills contain a brief description of the offence committed and many of the ‘true bills’ are annotated with the trial verdict and, on occasion, the sentence passed.

There are inconsistencies between the records of alleged crimes found in the indictments, and those recorded in court minute books, which to some extent reflects the different purposes of each set of records. The clerk of assizes was expected to produce four calendars of the delivery of the gaol: one copy for the judge; a second copy for the clerk of assize; the third for the sheriff; and the fourth went to the gaoler. The clerk’s copy of the minute book and gaol book for Yorkshire can now be found in TNA ASSI 41 and 42. These books record the name of the accused, the substance of the charge, the plea, the verdict and sentence and the names of the grand and petty jurors. Some books in these series also include minutes of recognizances (sureties) taken in court. Where both the minute book and gaol book survive for the same sessions, the records are not identical and the names of some defendants are omitted from one or other of the books. The fact that the two books were created for different purposes may explain some of the discrepancies.
Entries of traverses (challenges to indictments) more commonly appear in quarter session minute books for Yorkshire, while the estreat rolls in TNA series E include records of some of the fines and forfeited recognisances collected by local sheriffs. One rare book of costs exists in ASSI 43, which provides some insight into the cost of legal proceedings. 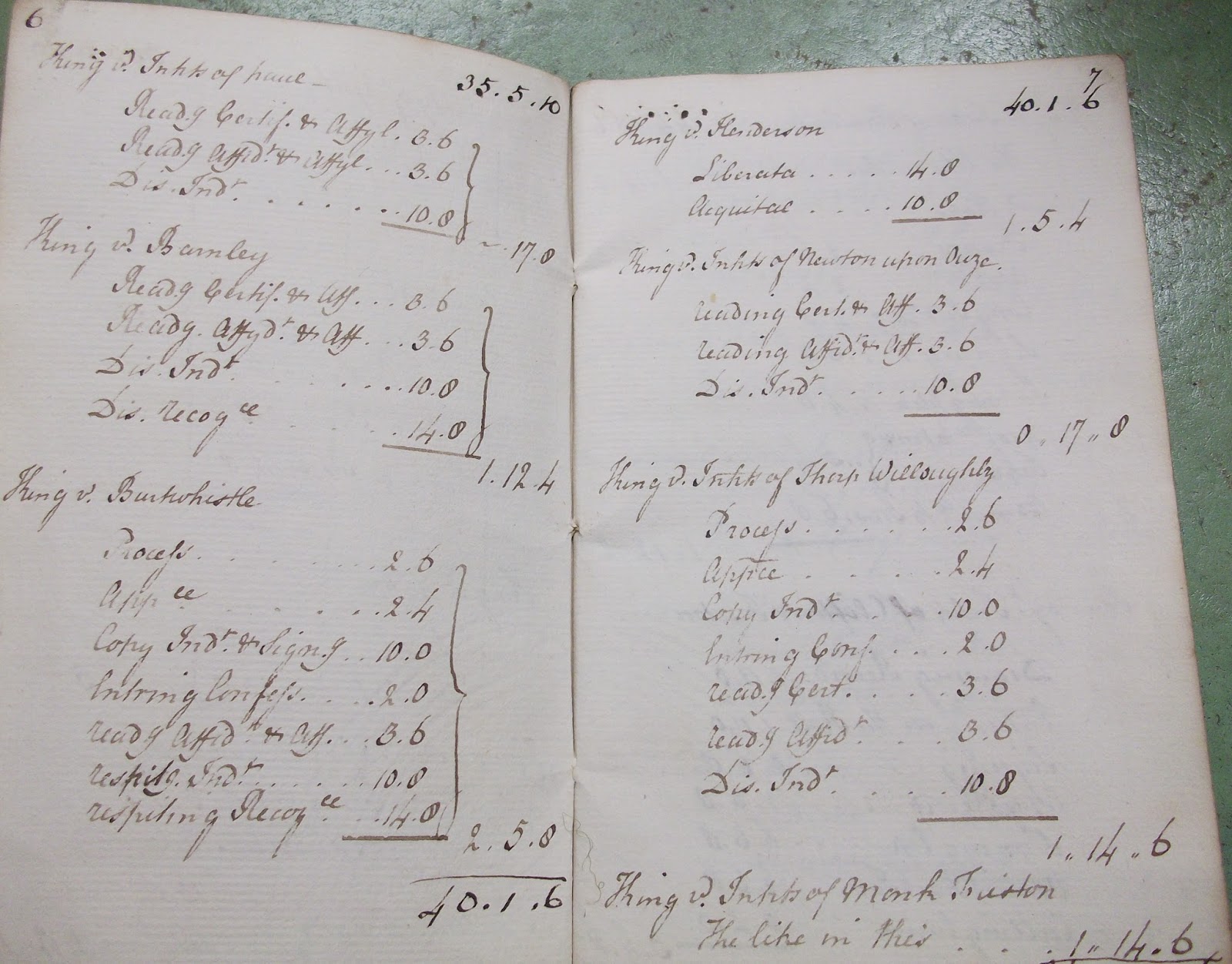 ASSI 43/8, small fee book c.1765
Transcripts of circuit memorials, listing the names of capital convicts recommended by a circuit judge for the king’s mercy, can be found in TNA series SP 36 and 37. These books contain, inter alia, incoming correspondence to the Secretary of State’s office relating to the judicial administration of each county, while outgoing responses are found in TNA SP 44. Individual pleas for mercy are also found in these series.
Supplementary data relating to legal proceedings can be found in contemporary newspapers and broadsides. Few cases heard outside London were reported in printed form but some printed articles have survived in the British Library, Eighteenth Century Collections Online (ECCO) and in the microfiche series British Trials, 1660-1900, Chadwyck–Healey (publishers).

Quarter session records are not stored centrally and the records for the East, West and North Ridings of Yorkshire are held across the three county record offices at Beverley, Wakefield and Northallerton and in the local record offices at Leeds, Doncaster, Hull and the City of York. While local record centres have some digitisation programmes, I had to visit each of the record centres for the purpose of collecting data for my PhD.

Bills of complaint presented at quarter sessions and assizes were subject to review following the application of a defendant, by a writ of certiorari, to remove a bill from the lower court to the King’s Bench. Difficulties arise in identifying cases determined before the King’s Bench because procedural rules required that the writ had to be served before the jury appeared in the inferior court:[1] thus the minute books of the quarter and assize sessions in Yorkshire are generally silent on such matters. The practice in the provinces was that particular cases were put over from quarter or assize sessions to be determined by a circuit judge, sitting as a judge of the King’s Bench. Records of their proceeding were collected locally and returned to the central offices of the King’s Bench in London (TNA series KB). It does not appear that returns were made on a methodical basis and records of a matter determined locally in one year might not appear in the records of King’s Bench until some years later.
As an example of quarter session-record holdings, the West Riding of Yorkshire (WRY) records held in Wakefield (series QS1 and QS4) contain, inter alia, indictments and recognizances with some informations, examinations, depositions, lists of jurors and calendars of prisoners. A preamble to each session notes the date and place of the session, the justices attending and the names of the grand jurors. The transcript of each indictment is annotated with a record of the verdict, sentence and names of witnesses. Notes of each session end with a list of the bills of indictment which the grand jury returned as ignoramus (bills not found) and of recognizances taken at that session.
QS4: ignoramus bills for Wakefield, July 1735 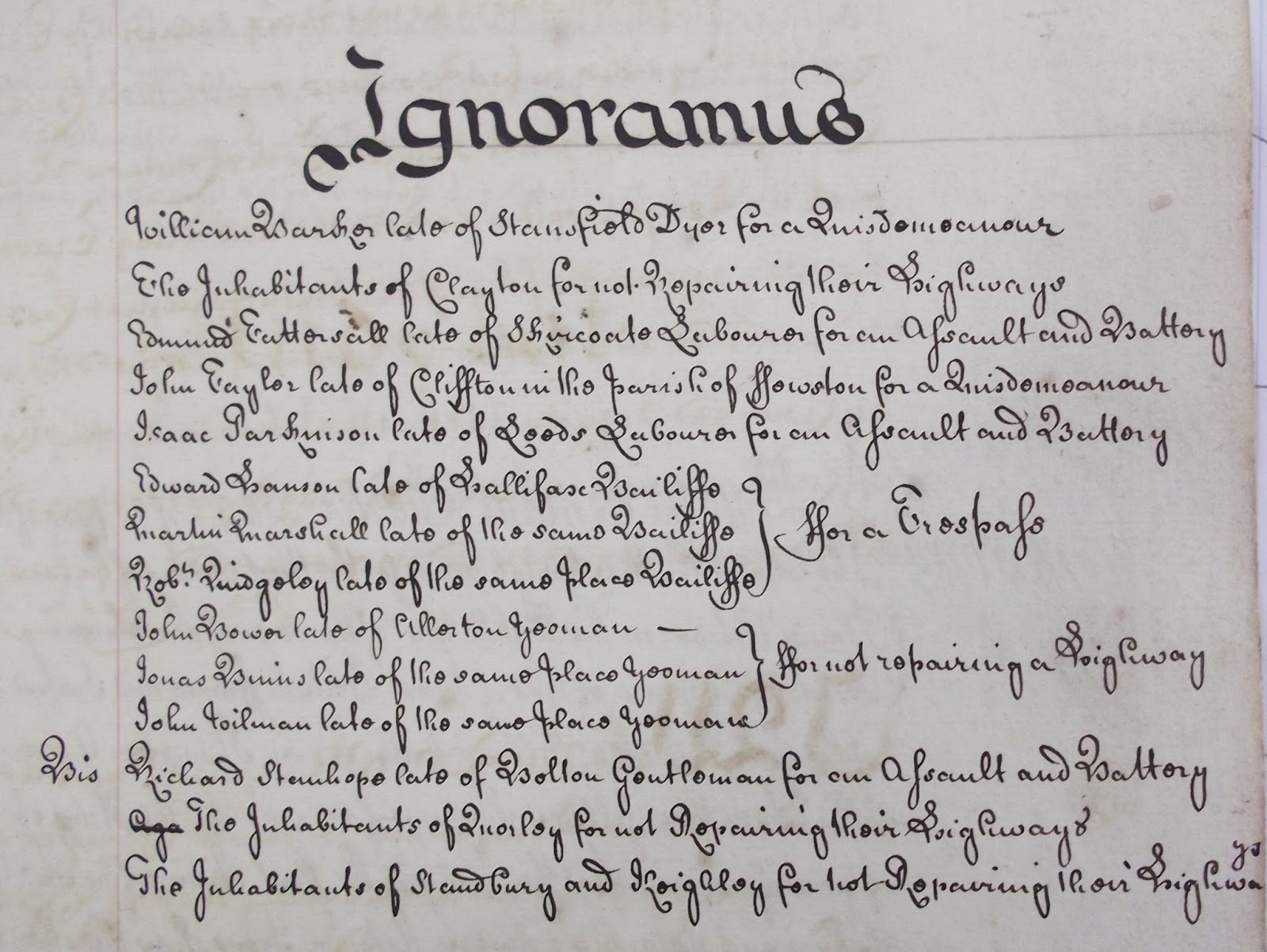 Quarter session-records for the West Riding is generally chronologically complete and well maintained. Records for the quarter sessions in the East and North Ridings have mixed survival rates, nevertheless, sufficient records have survived across the county to create a substantial data base which covers both urban and rural areas and from which meaningful statistical evidence can be extracted.

Manorial courts continued to play a part in local law enforcement during the eighteenth century and dealt with a range of complaints from determining nuisances to settling personal disputes, complaints of trespass by livestock, petty thefts (such as theft of wood and gleaning) and minor assaults, verbal assaults and scolding. Manorial courts had the power to impose fines for breach of local byelaws and impound animals that strayed onto the manor lands, as well as exercising a number of powers that crossed over with those exercised at petty and quarter sessions. A survey of manorial court records was beyond the scope of my PhD and remains an area for future research.

In my next blog I will consider some of the problems with these primary sources.