History of Crime: Problems with Legal Sources for the Eighteenth Century

There is no authentic voice of the eighteenth century criminal trial as no verbatim records were made during this period; what does survive in newspapers and the few broadsides is edited and, by its nature, incomplete. Judicial sources are bureaucratic records created for specific administrative purposes and contain little, if any, commentary on social policy. Witness statements are likely to contain bias, when prosecutors overstated a case, defendants understated any part taken by them in a criminal activity, and third party witnesses provided hearsay evidence. As has always been the case, witness statements were susceptible to ‘false memories’, depending on the length of time between witnessing an event and making a statement.
As described in my previous blog, http://c18thgirl.blogspot.co.uk/2014/07/locating-and-selecting-primary-sources.html, the clerk of assizes was expected to produce four minute books, each serving a different purpose. Discrepancies between the record books arise because of the different purposes each set of minutes served. The clerk of assize’s copy (Crown Minutes) was a record of attending judges, grand and petty jurors, accused and indictments heard by the petty jury; the judge’s copy allowed him, for instance, to comment on an appeal for mercy from a capital sentence; the sheriff’s copy allowed him to claim the revenues due from court fines and forfeited recognizances; while the gaoler’s copy was a record of prisoners delivered at the beginning of the assize sessions and returned at the end, with details of particular punishments to be inflicted. As a result, minute books for the Yorkshire assizes omit any detail of bills dismissed by the grand jury; fines imposed are more likely to be noted only in the sheriff’s records; while the length of a period of hard labour was most likely to be recorded in the gaoler’s copy. 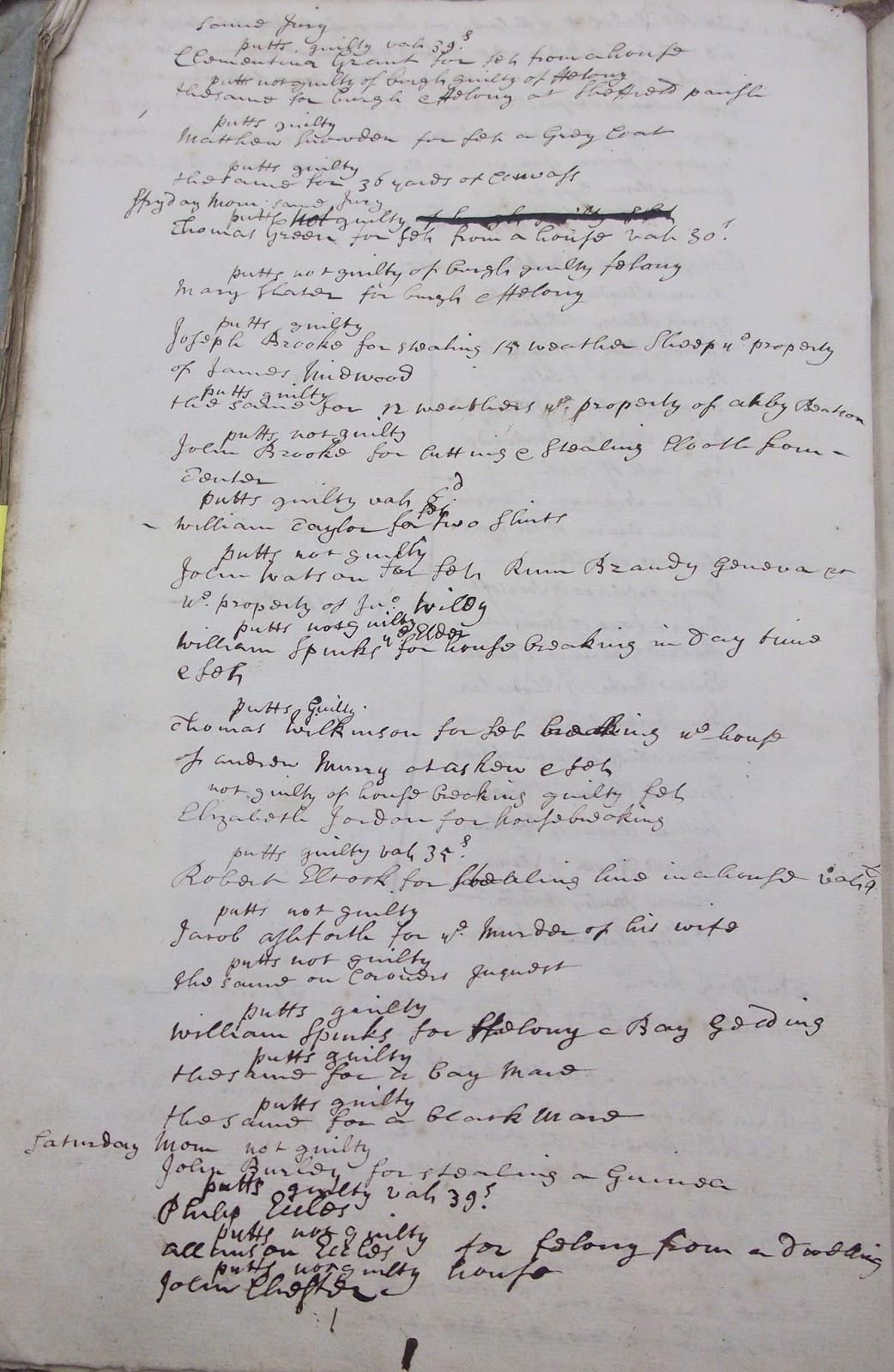 TNA ASSI 41/3 March 1740, extract from the Crown Minute Books for the Northern Circuit - showing the verdict but not the sentence.
The absence of a recorded verdict or sentence in the surviving minute books does not necessarily mean the failure of a prosecution but should act as a prompt to consider alternative dispute resolution options within the entire judicial process. There were a number of procedures which would cause a trial to be adjourned and might explain the failure of a clerk to annotate the minute books with an outcome that was determined at a later date: a trial for a misdemeanour could be set aside to allow the parties to reach a private settlement; a hearing could be adjourned to a later date to allow a traverse (challenge) to an indictment to be separately determined; questions on legal process in a lower court were referred to the King’s Bench; while many victims failed to prosecute their complaints for a range of personal reasons.
Magistrates were bound (in theory) to commit an accused felon to gaol pending trial and the length of time spent on remand depended on whether the complaint was referred to the following quarter sessions or the biannual assizes. In such circumstances, it is possible that many victims took advantage of the remand system to punish an accused man or woman with a short spell in gaol, without necessarily going to the lengths of pursuing the prosecution by appearing for the trial. Other victims may have been satisfied by the restitution of their property, or by a victim publicly begging the pardon of the accuser, while a man or woman bound by an order to keep the peace imposed by a single magistrate could be released from the court without further charge, if he or she had managed to keep out of trouble between the time of the order and the court sitting.
A successful challenge to an indictment meant that the claim did not return to the referring court for trial, while some matters referred to the King’s Bench were determined there and, similarly, did not return to the initiating court. However, matters referred to the King’s Bench were dependant on an  understanding of the judicial processes, plus access to independent financial means to pay for legal representation to put legal arguments; therefore, they are likely to account for only a small percentage of unknown outcomes.
To compound these problems, any collection of criminal records is bound to be flawed by the history of record keeping that precedes it and the evaluative judgements exercised in selecting data which, in the case of legal records, was itself selected by witnesses, legal clerks, justices of the peace and assize judges, the ministry of justice, local record offices and the Public Record Office (now The National Archives, TNA) , and by each subsequent researcher.