Some observations on servants and the judicial process in eighteenth-century Yorkshire.

While legal authority lay with the king, his secretaries of state, judges, sheriffs, justices of the peace and parish constables, authority within the family lay with the head of each household and the rights of servants were subsumed within those of their employers. There was a common association in the minds of society generally between domestic service and theft, illicit sex, pregnancy and infanticide and conduct books warned female servants about dishonesty, entering into quarrels and on matters of chastity with men servants, the master, his sons and gentlemen lodgers. 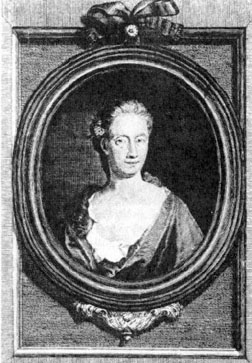 
Eliza Fowler Haywood (1743) A present for a servant-maid. Or, the sure means of gaining love and esteem, London: T. Gardener.


(1771, Revised) A present for a servant-maid: containing rules for her Moral Conduct both with respect to Herself and her Superiors: The Whole Art of Cookery, Pickling, and Preserving, &c, &c. and every other Direction necessary to be known to render her a Complete, Useful and Valuable Servant, London: G. Pearch and H. Gardener.


The freedom to move in domestic settings allowed domestic servants to acquire knowledge from friends, neighbours and other servants of what goods were available and when and how access to them might be obtained. In response to an outcry among wealthy householders over a spate of burglaries thought to have been organised by servants of poor character, the Servants' Characters Act 1792 was passed to forbid staff from supplying false character references. The act was used only once in a successful prosecution before it was repealed in 2008. The records for Yorkshire are fairly quiet on the topic of domestic theft and it is possible that minor offences were dealt with summarily within the household by some form of ‘moderate correction’ or the servant dismissed without a reference and effectively punished through subsequent loss of character.
Theft from a master or mistress came within the common law definition of crimes of fraud and dishonesty when victims handed over goods or money willingly to one of their servants and acquisition did not include the necessary taking ‘by force of arms’ for theft. However, a statute of 1529 created an exception to the common law and made it an offence for a servant to appropriate or ‘embezzle’ goods from his or her master where the value exceeded 40shillings.[1] Therefore, when Daniel Drummond was found guilty at the York Assizes of theft from his master of three guineas (63 shillings) he was sentenced to transportation for seven years.[2] Another employee who admitted to having accepted a stolen half guinea from Drummond, in return for not reporting him, escaped prosecution for receiving stolen goods by giving evidence against Drummond, although it is possible that he was punished informally by the loss of his employment.
A female servant, Ann Willoughby, was charged under the same statute when she was accused of the theft of a gold coin valued at 36 shillings from the top of a chest in her master’s house and £6 in coins from inside the same chest on an earlier occasion.[3] Her mistress explained that the gold coin had been left out to trap a suspected thief and that she saw that Willoughby “made a pretence to seek” for the gold coin and “found” it on the floor. Willoughby was charged with the theft of the coin but acquitted at her trial. If no evidence were presented to prove that Willoughby stole other money from inside the chest, any offence committed by her fell below the statutory 40 shilling threshold and a direction to acquit would have been inevitable.
In the absence of many similar cases for the county one may conclude that justice was deemed to be served by some combination of the return of goods stolen, an arrangement whereby the servant ‘worked off’ the value of goods taken, some form of corporal punishment by the master, or the dismissal of the accused servant with loss of good character and no references.
By the eighteenth century, two magistrates sitting at the petty sessions were empowered inter alia to imprison a servant for up to one year for an assault on his or her master. In contrast, masters and mistresses were entitled to use ‘moderate’ methods and a ‘reasonable’ instrument in chastising a servant, over whom they had natural authority. The reasonable use of physical abuse could be justified in terms of upholding order in a household, so that many incidents of abuse were ignored. 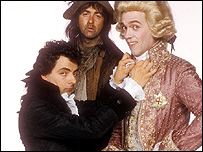 BBC, Blackadder
Nevertheless, justices of peace were seen to undertake thorough investigations into complaints of excessive assaults upon servants and this is particularly evident when allegations were made against adults accused of the physical and sexual abuse of children and young people. In 1771, husband and wife, John and Hannah Walker were jointly convicted of a prolonged and vicious assault upon a thirteen year old Elizabeth Owens who lived and worked in their home as a domestic servant. The indictment for that assault ran to over six pages, detailing fifty days of systematic abuse.[4] Nothing is known of the girl’s background but it is possible that she was one of the poor children of a parish who had been apprenticed into domestic service, in which case she was vulnerable to both physical and sexual abuse. John Walker did not plead “not guilty” but submitted to the court, possibly because he accepted his right to beat his servant as response to any domestic disorder. The couple each received a small fine for their actions, the standard punishment for an assault at this time. However, the impetus for the investigation and prosecution appear to have come from the parish and justices of the peace who acted on behalf of the community to punish anti-social behaviour, regardless of the victim’s circumstances.
The murder of a master by his servant fell within the category of ‘petit treasons’, for which a female servant would burn at the stake and a male servant hang.[5] While a man’s violence towards his servant was perceived in terms of the ‘natural’ authority a man held as head of his household; reciprocal violence by a servant was subversive and a threat to social order. Therefore, when Thomas Butler was unsuccessful in his attempt to poison his master he was convicted of a misdemeanour and sentenced to a term of two years in gaol, at a time when other men convicted of manslaughter might expect to be released immediately after being branded on the hand.[6]
Female servants were put in a particularly vulnerable position if they became pregnant by a member of the family they served. In 1774, John Scott was convicted of murdering a female servant (who already had a three year old child by him) by giving her a fatal abortifacient.[7] Sir Henry Gould, the presiding judge, made no recommendation for mercy but added a requirement that Scott’s dead body be dissected and anatomized after he had been hanged. However, a private petition for mercy must have been made by a person or people of influence because by the following assizes his sentence had been commuted to transportation.
One year later, John Bolton was accused of strangling his servant, Elizabeth Rainbow.[8] Bolton was a married man with five children who six years previously had taken in a young boy and girl (Elizabeth Rainbow) from a local foundling hospital to work and live in the family home. It is likely that Rainbow was in her teens when she died and the enquiry into her death revealed that she was pregnant with Bolton’s child at the time of her death. Bolton was convicted of her murder, sentenced to hang and his body dissected and anatomized, although he committed suicide in prison before the sentence could be carried out. 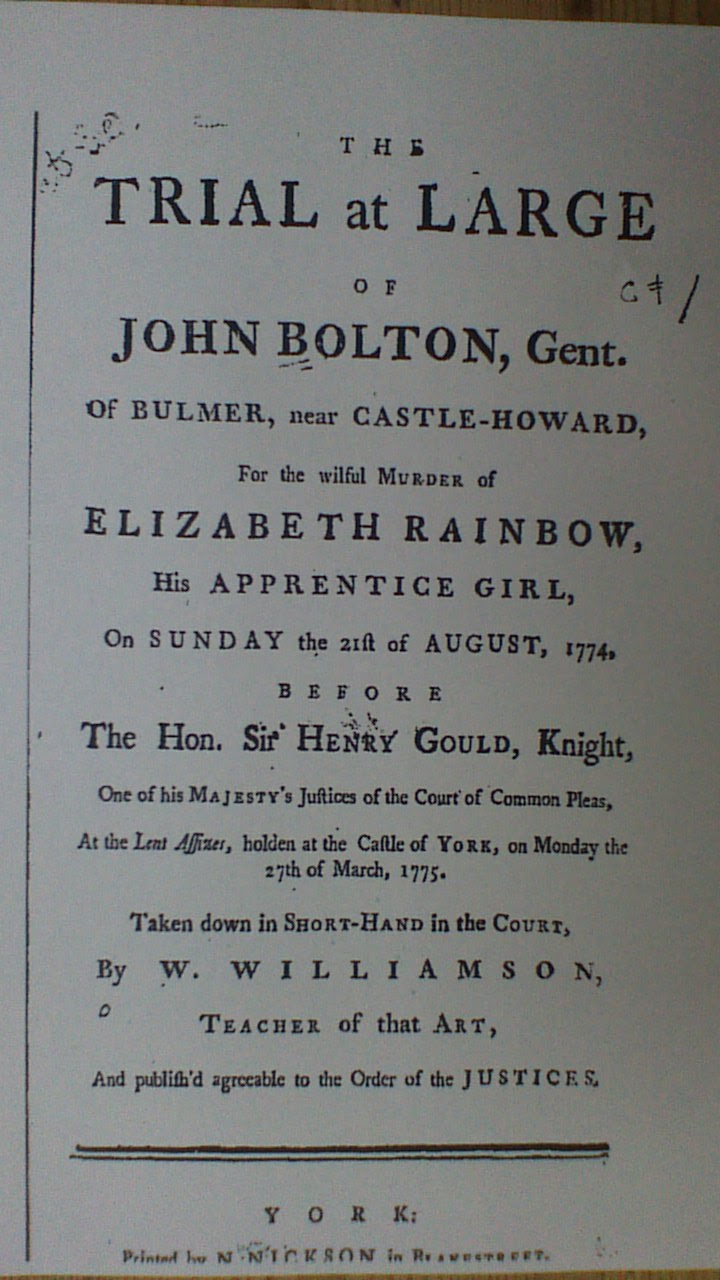 ECCO – Eighteenth-Century Collections On-line
The physical appearance of a female servant could play a significant part in her experience as a victim of a sexual assault. The broadside account of Bolton’s assault includes the prosecutor’s reference to the girl’s good looks in connection with the temptations to her master. He stated in his opening speech that “it was to be her misfortune to be handsome”, as if to explain Bolton’s behaviour, and it serves to underline the difficult position of a young girl living in close proximity with those on whom she was wholly dependent for her support and well-being.
The outcomes of master/servant relationships were unbalanced when many acts of new-born child murder were alleged to have been undertaken by female, domestic servants living with or near their employers, yet few women would have had the courage to accuse a master or his son of an initial rape. The fact that many servant girls appear to have given birth in secret in their employers’ houses is remarkable since it required a woman to keep her pregnancy secret. It is the secrecy surrounding a pregnancy and birth that raises questions as to whether other members of the household really were ignorant of a pregnancy or whether a ‘blind eye’ was turned unless, or until, the discovery of a baby’s body forced them to address the matter.
The 1624 statute on concealment reversed the standard burden of proof, so that an unmarried woman accused of murdering her baby was obliged to prove her innocence.[9] Indictments for infanticide were viewed in terms of punishing immorality, although by the 1770’s there was far greater awareness of the vulnerability of domestic servants, in particular, and doubts were being expressed on the accuracy of available forensic evidence.
In general, while violence might be condoned when it was directed to uphold household order, recourse to the judicial process might be sought when a master or mistress was perceived to have abused those powers.