In an attempt to curb frivolous prosecutions, Parliament provided that no criminal prosecutions were to be filed in court without an express order from the court or without taking a recognizance (financial surety) from the informant for an effectual prosecution.[1] There were three types of recognizance relevant to the trial process: a recognizance to prosecute (often issued to the victim of the alleged crime); a recognizance to appear (issued to a man or woman accused of a non-felonious offence) and witnesses recognizances (issued to prosecution witnesses). Coroners were also empowered to bind key witnesses, including examining surgeons, to attend the assizes.[2] Those accused of a felony were committed to gaol pending trial.
The failure to take a recognizance from a prosecutor or prosecution witness did not mean that they could not appear at the trial but they could not be compelled to attend. In contrast, witnesses for the defence could not be bound or otherwise compelled to attend by the court but appeared only at the request of the defendant. Legislation passed in 1749 introduced a requirement for a minimum of two witnesses be produced at trial to support any claim in felony: thereafter, the use of recognizances to bind prosecution witnesses to attend gained greater significance.[3]
It was not always the case that the victim of a crime was bound to prosecute the accused, particularly when the victim was female and had a parent or husband to act on her behalf. Where the complaint related to a matter of homicide, a male member of the family or community might more commonly be bound to prosecute. Because of doubts concerning the capacity of married women to be contractually bound by their own recognizance, conditions for the appearance of a woman in court might vary according to whether she was married or single. When James Broadbent and others were indicted for their part in a coining operation in the county, male witnesses were bound in the sum of £40 each to secure their attendance while the married, female witness was bound to give evidence ‘on pain of imprisonment’ if she failed to attend.[4] Either her husband was unable to provide sufficient sureties on her behalf, or she was deemed more susceptible to intimidation or corruption. 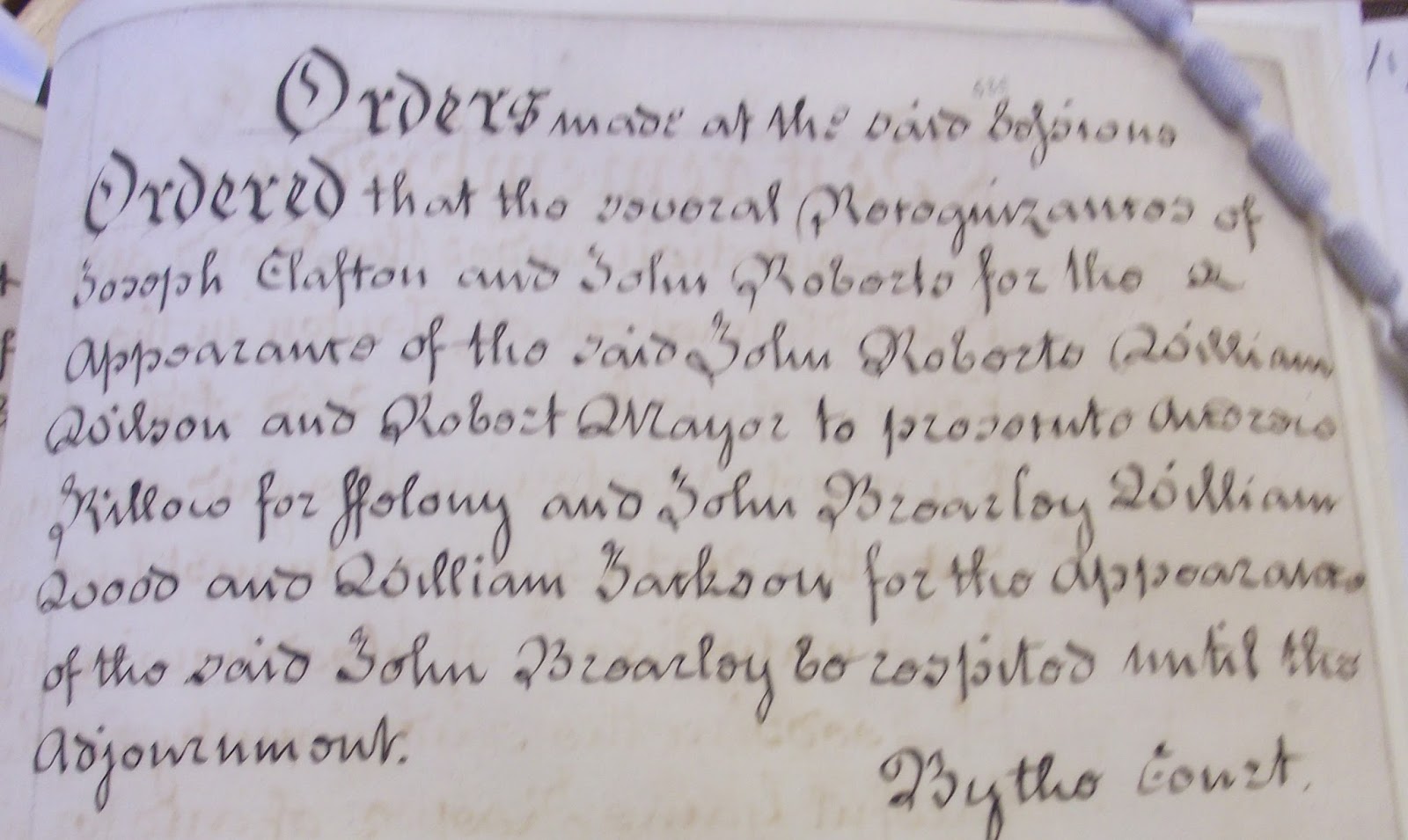 Recognizance, Leeds Quarter Sessions (1765) QSL 1/6
When Robert Waddington was accused of the rape of Ann Rawson (a spinster) a recognizance of £50 was issued for her to give evidence against Waddington, while William Rawson (probably her father) was ordered to enter into a recognizance for £25 to prosecute him.[5] However, when Jane Smith (a married woman) accused John Hallott of an attempted rape, George Smith (her husband) was ordered to enter into a recognizance of £40 on the condition that he and his wife appeared at the next assizes to prosecute Hallott.[6] In that respect, the justices differentiated between the relationships of husband and wife and father and daughter, by placing the daughter more firmly in the position as the property of the father, when she was only required to give evidence, whereas the married woman was named as co-prosecutor.
Even when women played a key role in the investigation of a crime, the decision to bind a woman to prosecute depended on her financial independence. Therefore, when Elizabeth Frazier and Barbara Thompson were ordered to prosecute Ann Parcivall for infanticide, recognizances for their appearances were provided by Frazier’s father and Thompson’s husband.[7] When a female victim lacked any male support, the terms of her recognizance might be potentially more onerous because of her susceptibility to threats or intimidation to withdraw her complaint. Ann Knowles (a widow) was bound by a recognizance for £100 to prosecute two men and a woman for the theft of a large quantity of clothes and household items from her house.[8] Witness recognizances were taken from William Clark and his wife in the sum of £80, as they were said to have bought items of female clothing from one of the accused. A third witness, Richard Winterburne was bound in the sum of £50 for his evidence against another of the accused, having bought an item of stolen clothing from her. A fourth witness, Ralph Winterbottom, entered into a recognizance of £20 to give his evidence against all three defendants relating to his suspicions that they were the people who had committed the burglary. The fact that Knowles entered into a recognizance to pursue the prosecutions in her own right reflected both her status as a financially independent woman and, at the same time, her susceptibility as a woman to intimidation by any one of the witnesses, who were themselves involved in the purchase of stolen goods. In contrast, the different bonds ordered in each witness recognizance reflected the role played by each individual in the events described and the likelihood of their wishing to avoid giving evidence, rather than any specific issues of gender. 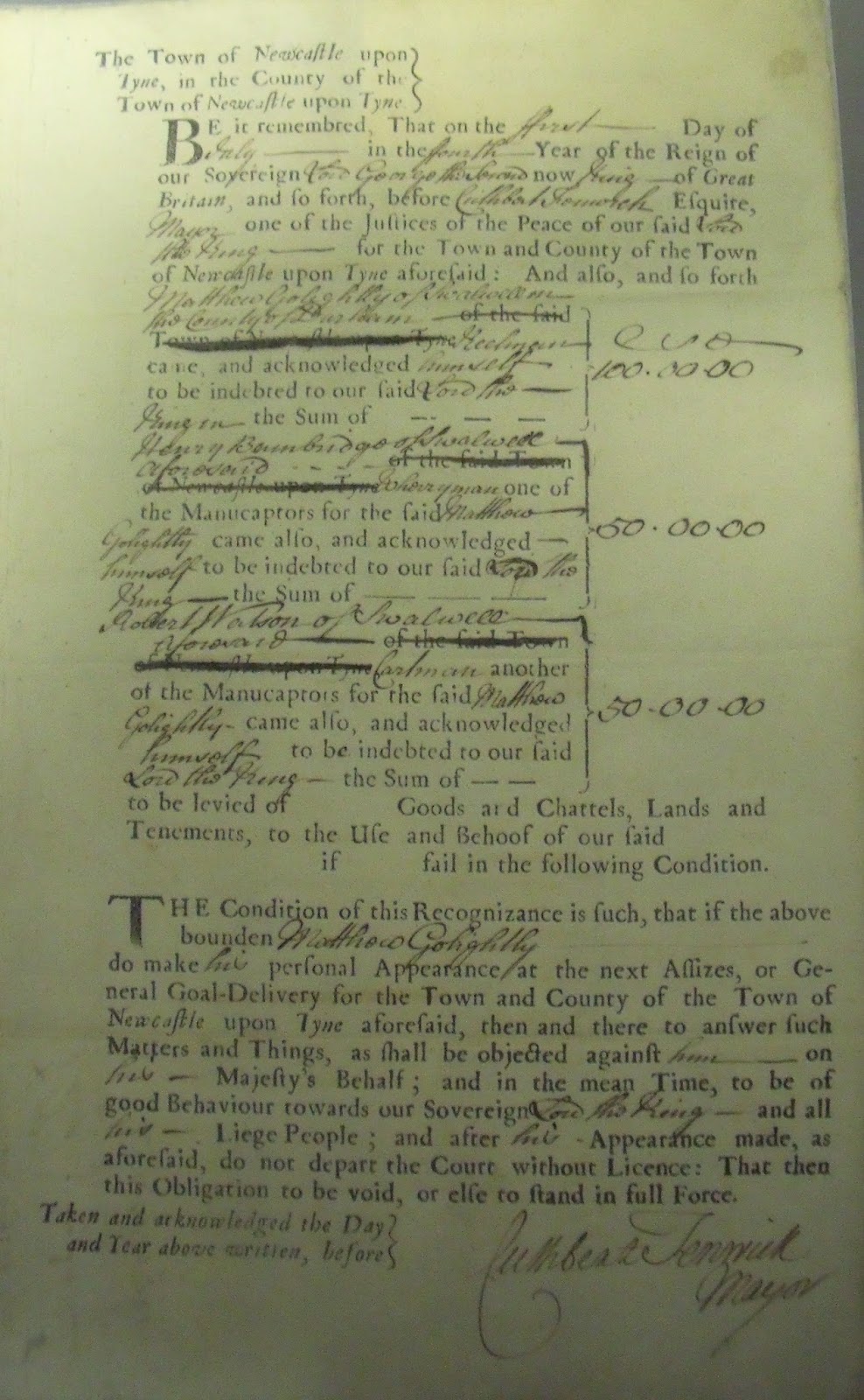 Recognizance, Newcastle Assizes (1740) TNA ASSI 45/21/4
The rules for binding prosecutors have been criticized for having “transformed the role of the private accuser from option to obligation” because of the condition that prosecutors would forfeit their recognizances if they failed to appear at the gaol delivery to give their evidence.[9] However, there is little evidence to suggest that magistrates regularly insisted that a victim proceeded with a prosecution if he or she did not wish to do so. Neither is there any evidence in Yorkshire to support Landau’s assertion that corrupt justices could abuse the system of recognizances to threaten and intimidate witnesses.[10]
Some judges were willing to aid the prosecution case by postponing hearings while settlements were negotiated, during which time a defendant might be remanded in custody if he or she were unable to find recognizances for their appearance at a later hearing. For example, Elizabeth Bruce and Thomas Richardson were jointly indicted for an assault on a man when attempting to rescue livestock. They were ordered to remain in gaol until the next assize, unless they were able to provide their own recognizances in the sum of £50, plus two sureties each of £25.[11] The case was discharged when the victim reported to the court that he had ‘received satisfaction’. In those circumstances, the threat of imprisonment was sufficient to force the defendants to reach a compromise with the complainant.
Bail and committal procedures
Different issues became relevant in the consideration of the grant or refusal of bail to an accused, where the alternative was imprisonment until the day of the trial. When George Bainton, a local attorney, was jointly accused with another man and woman of forgery, he was released on his recognizance of £200, with sureties of £100 from two other men.[12] There is no evidence that either of his accomplices were offered the opportunity to find sureties for their return to court and it seems likely that Bainton’s social standing influenced the committing justice’s decision to grant bail. Nevertheless, Bainton and his male accomplice were convicted and sentenced to death and the female accomplice was acquitted. While Bainton ‘flattered himself with the hopes of a reprieve to the very last moment’, it was his accomplice who succeeded in martialling support for a petition for mercy.[13] Likewise, when in July 1765 Jane Henderson was accused of arson, Mary Dixon of the murder of her baby and Thomas Hutton of forgery, Henderson and Dixon were remanded in prison until the following assizes while Hutton was made subject to a subpoena for his attendance.[14] The remand of Henderson and Dixon was inevitable because their offences fell within the category of felonies, but forgery was also a felony for which Hutton should have been remanded in gaol. However, forgery was an offence of the literate, with the accused often coming from a higher social group than other common criminals. Hutton was in fact a school master and allowing him his freedom may be greater evidence of his access to legal advice, an ability to pay any legal costs and his appearance as a comparatively ‘sympathetic’ defendant, rather than providing evidence of male/female discrimination.
For those on the lower end of the social scale, not even pregnancy or mental illness were automatic grounds on which a magistrate might veer from the statutory provisions in ordering a committal for gaol, as demonstrated by a note found in the quarter session-records for Beverley: “I send you two women one of them big with child & troubled with fits so if you should let her have the use of a bed for a while I will set you a reasonable allowance for it”.[15] These cases appear to provide not so much evidence of gendered discretion but the influence of money and social status.
Where the facts of a potential felony might be interpreted in terms of a trespass to goods, a circuit judge or magistrate was empowered to determine the case under their civil powers and order compensation in settlement of the dispute. Thirty-four cases located in the quarter sessions for the East Riding (1765-1775) are marked as determined under the justices’ civil power and includes at least one assault and one theft of hens, both of which fell within the civil powers as trespasses to the person and to property. The advantage to a defendant was that the right to bail was automatic in all civil proceedings. Even so, because of the restrictions imposed by the bail and committal acts, it has been estimated that bail was granted in less than 10 per cent of criminal cases and only then for very minor offences.[16]
Failure to prosecute a case committed for trial was an offence punishable by imprisonment as it served to undermine the judicial process, yet there is little evidence that those who failed to appear were required to forfeit their recognizances to prosecute. To that extent both victims and magistrates were complicit in the punishment of many suspects who were remanded in gaol or the house of correction pending trial, without giving the accused an opportunity to clear his or her name when released following an aborted trial. There is a clearly a complex story behind the grant or refusal of recognizances and it is an area that would benefit from wider examination.