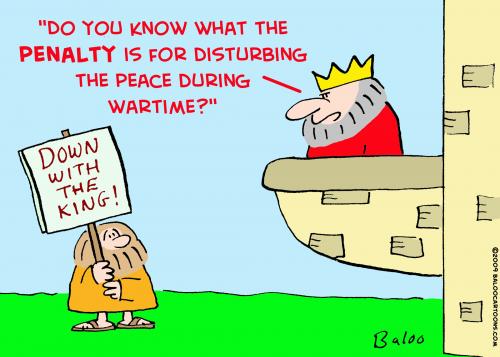 By rmay 28 June 2009.
The law relating to orders to ‘keep the peace’ was enshrined in English law in the fourteenth century,[1] although the notion is of Anglo-Norman origin,[2] and is little changed 650 years later. A person can be bound by a magistrate to keep the peace and be of good behaviour, either generally or towards a specific person/s, for a stipulated period. When binding a person, a magistrate will usually stipulate a fine to be paid if the person later breaches that order. If the person breaches the conditions, he or she can be compelled to return to court where the magistrate may impose the fine or otherwise dispose of the case.


Orders to keep the peace are founded in concern with public order and are not categorised as a criminal conviction/punishment. They can be made against an accused, witness or claimant and usually concern a case involving violence or the threat of it and some complainants will drop a claim if the accused agrees to be bound over to keep the peace.


An eighteenth-century justice of the peace might resolve disputes between quarrelsome neighbours by requiring that those involved were bound by recognizances to ‘keep the peace’ until they made an appearance at the quarter sessions, at which time they would generally be released from their obligations if no new complaints were made against them. In practice, responses to acts of violence were measured in terms of social hierarchy, individual means and contemporary attitudes to the nature of the offence. Therefore, when John Umphelby, a gentleman, was accused of an assault by shooting at Francis Hunt, he was released from court on his recognisance of £500 to keep the peace and four additional sureties of £200 each.[3] During the period 1765-1775, 105 cases have been identified from the Beverley quarter sessions where four women and 101 men appeared at various times on their recognizances and received orders to keep the peace. The relative absence of orders against women to keep the peace may be explained in part because of an interpretation of the law that stated that a man might be released on his own ‘surety for the peace’ but doubted the ability of a married woman (femme covert) or a child under the age of twenty-one to be legally bound without additional securities provided by their friends or families “for they are incapable of engaging themselves to answer any debt”.[4] 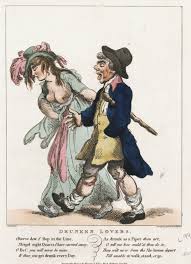 Drunken Lovers by Thomas Rowlandson (1798)
Just over half the orders for men to keep the peace arose out of an incident involving another man. Of the female complainants of male ‘nuisances’, one-third  were wives of other men but without more information it is difficult to assess how many complaints arose out of allegations of unwarranted sexual attention. Complaints by wives against their husbands represent less than 10 per cent of all the orders against men but they provide rare evidence that some justices of the peace were prepared to take some steps to protect a wife from a violent husband, although the initiative lay with the abused wife and a justice’s powers were limited. Because of guidance that additional sureties should be taken before a woman could be bound to keep the peace, it is possible that women who caused a nuisance were dealt with by being ‘handed over’ to their father, husband or master without any further orders, which would explain why very few orders are found for women in Yorkshire to keep the peace. In the one exceptional case, in which a husband felt strongly enough to make a public complaint against his wife, the justice of peace took recognizances from another man in the community (possibly a relative of the complainant’s wife) requiring Diana Foster to be of good behaviour and keep the peace towards her husband.[5] In such cases the resort to patriarchal authority had clearly broken down.
It is difficult to estimate the extent to which these orders were policed by the community, although, a requirement for additional sureties obliged members of the family or local community to monitor behaviour. Alternatively, reciprocal orders allowed for self-policing between argumentative neighbours: when John Askam, a gentleman, farmer of Wilberfoss in the East Riding received an order to keep the peace towards Joseph Smith, a farmer from the same village, a reciprocal order required Smith to keep the peace towards Askam.[6] Otherwise, when the behaviour of any individual became too disruptive, a magistrate had authority to commit him or her to the house of correction until the following quarter sessions. 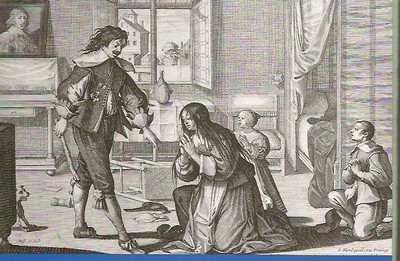 18th Century Chastisement: French illustration
While a few violent men in Yorkshire were ordered to ‘keep the peace’ towards their wives, very few of them were separately convicted of an assault during the periods surveyed (1735-45 and 1765-75). James Barber was fined 1shilling in 1740 for an assault on his wife and widowed mother-in-law and ordered to find sureties for his good behaviour because of his history of “frequently cursing, abusing, assaulting, beating and grievously threatening both women”.[7] Likewise, in 1765, John Winn was accused of an assault on his wife, for which he was ordered to remain in gaol until he found sureties for his good behaviour towards his wife.[8] Both orders suggest concern for the future protection of their wives, rather than punishing the offender. In a different domestic setting, Elizabeth Dickinson was the victim of an assault by her son for which he was found guilty and ordered to remain in gaol until the next assizes, by which time he was expected to find two sureties for an order that he keep the peace.[9] The sentence removed the source of the problem for six months, after which time two members of the community were bound to supervise any delinquent behaviour which broke ‘social norms’. These orders also demonstrate contrasting attitudes towards a husband’s right to ‘chastise’ his wife and social expectations that a son should treat his mother with respect which Garthine Walker similarly observed in seventeenth-century Cheshire.[10]
It is not known what level of behaviour forced the husband of Diana Foster to make public the fact that he had lost control of his wife, to the extent that he sought an order that she keep the peace towards him.[11] That case was unusual at a time when men, who were dishonoured by the behaviour of their wives, might expect to be mocked by their neighbours by displays of charivari. 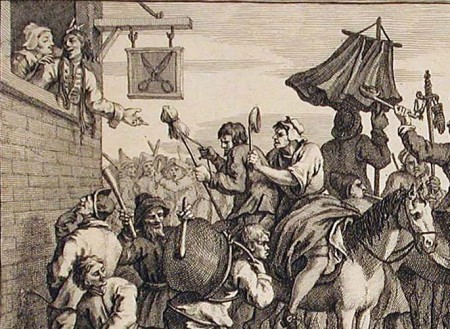 William Hogarth, Charivari
It was generally male family members or men from the wider community who were encouraged to police the behaviour of troublemakers by acting as sureties for other men and the occasional woman who had been bound over to keep the peace. The relative absence of orders against women to keep the peace in Yorkshire is likely to have arisen because of doubts about the binding nature of financial orders against infants and femmes covert without additional sureties, rather than the timidity of women.