Part 1: The rise of the male medical professional in the field of midwifery: the work of William Gifford.

I am fortunate to have been alive at the end of the twentieth century and living in the United Kingdom when I gave birth to two healthy children. I was able to take full advantage of a National Health Service which offered professional midwives and doctors to attend both deliveries and provided pain relief in the form of a TENS unit, gas and air, pethidine and an epidural. In both instances I benefitted from medical staff skilled in the use of forceps and, when one delivery appeared to be going wrong, a surgical theatre was prepared for an emergency caesarean operation. How different things would have been in the eighteenth century: it is unlikely that I would have survived the birth of my first child.

For many centuries, midwives in Western Europe occupied a lowly position, while some were labelled as witches and others outlawed by the Church. At the same time the male medical profession avoided women’s diseases and childbirth, unless medical intervention became essential, and the majority of normal deliveries were left in the hands of untrained midwives. The licensing of midwives in England followed on from an Act of 1512,[1] which did not mention midwives specifically but placed the licensing of medical practitioners in the hands of the Bishops, in order to prevent the practice of witchcraft. As a result of which, a woman of good moral character might obtain a licence from a Bishop to set herself up as a midwife, although any training was generally gained by working alongside an established midwife.

Cases referred to below are taken from Gifford, William (1734) Cases in Midwifery, London: Edward Hody (The Wellcome Library)

An increase in scientific and medical knowledge and the professionalization of man-midwifery during the eighteenth-century had the effect of making the attendance of a man-midwife a necessity at difficult births. Amongst the social elite the attendance of a surgeon at normal deliveries became fashionable, even during normal deliveries:
Case XIV
8 April, 1726:  I was about eight a Clock called upon to go to the wife of one of the Prince’s Servants.

Case VI
Thursday 16 September, 1725: I was sent for to a Gentlewoman about six miles from London, whom some time before I was ingaged by her Husband to be ready to attend whenever there should be occasion, and as soon as they judged by her complaints, that her labour would come on, they sent for me. [A midwife had been in attendance leading up to the point of delivery].
William Gifford was a surgeon and man-midwife: his journal contains accounts of 225 cases in which he was called upon to attend women experiencing difficult births. Extracts from Gifford’s case notes set out below demonstrate a defensive manner towards his professional skills and contempt for those of the untrained or negligent midwife.


I could wish indeed to have found his language more correct; but it is with this Book, as it is with Men, we ought principally to regard the Use they are of to Mankind: and I dare venture to affirm, that whoever shall persue these Cases with an interest to learn the Practice of Midwifery, will not think his time ill spent.
Edward Hody, FRS.
Whether called to assist a male or female midwife, Gifford was outspoken criticisms when either failed to provide a satisfactory level of service:
Case V
I was fetched in a great hurry to the Wife of a Chairman ... Another Man-midwife …  had been there before me, who at first would not attempt anything without a Sum of Money was laid down; but upon assurances that he should be paid, he worked upon the poor Woman, and left her (as I had afterwards reason to think) in a worse condition than he found her, telling her he was not able to deliver her.
A Man-Mid-Wife.[2] 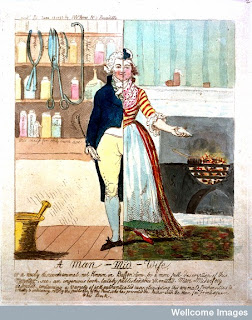 oloured etching by I. Cruickshank, 1793
Lettering: A Man-Mid-Wife, or a newly discovered animal, not known in Buffon’s time; for a more full description of this Monster, see an ingenious book lately published entitled  Man-Midwifery ...
While midwives and patients recognised that skilled help was necessary in certain circumstances, some midwives resented the interference of man-midwives in their work and delayed calling for assistance:
Case LXVI
27 March, 1729.  I rebuked her [the Midwife] for not sending at first, when she found it to present in a wrong Posture; but she in excuse, as is usual amongst them, told me that she had brought out many Children offering in that posture.  The Child from its having lain for some time so presented, was dead, which I told her was very probably owing to her neglect in not sending sooner, when she was satisfied the Child presented wrong.
As a result, in the battle between male and female midwives, female midwives were acquiring an increasingly poor public image:
Case LIII
30 November, 1728.  I was desired to go to a poor woman in Milford Lane .... I found things as represented; which in a great measure proceeded from the ignorance of the Midwife: ... I rebuked her for her carelessness.


Case XLIV
I thereupon passed my Hand into the Vagina, and found the parts somewhat swelled, by the Mid-wife too rudely handling them.

Case LVIII
7 February, 1728: I rebuked her [the Midwife] for staying so long before she sent for help; and I soon discovered her ignorance ... The Child was born dead, which I imagined to proceed from its lying so long in the posture I found it, and the Midwife’s too long rudely pulling the Arm.
Notes to this case:
This is one amongst many Inconveniences that occur from the ignorance of Midwives: had I been sent for most of my troubles, and the Child’s Life, might have been saved.

Case LXIII
6 March, 1728. The Midwife that was first with her, judged wrong, and thought it was the Foot that was fallen down;  but another being sent for ... I judged that the Midwife had been pulling out the Arm, for which I rebuked her; but she faintly denied it.
… the Arm which had been so long protruded, very much swelled, and very livid, and almost separated at the Shoulder; which proceeded from the Midwife’s too rudely pulling it.

Case XLIX
20 November, 1728:  I was desired to go into Durham Yard, to a poor woman, the wife of a Porter ... the Midwife being a Novice in her Profession, was not capable of giving proper directions.  She should have advised the labouring woman to have kept as much as possible her Throws ... but the Midwife neglect[ed] to give this advice, or to act in this manner.

Case LXVI
27 March, 1729.  I rebuked her [the Midwife] for not sending at first, when she found it to present in a wrong Posture; but she in excuse, as is usual amongst them, told me that she had brought out many Children offering in that posture.  The Child from its having lain for some time so presented, was dead, which I told her was very probably owing to her neglect in not sending sooner, when she was satisfied the Child presented wrong.

Case LXXX
26 August, 1729:  I was called up about two a’clock in the morning to go to a poor woman in Westminster who was then in Labour ... The Child was born dead, which proceeded, as I Judged, from its lying in so uneasy a posture, and from the Midwife’s ignorance, in not knowing how to keep up the Arm, and letting the Shoulder be so pressed against the Os internum.
Case XC
9 November, 1729:  ... all which was owing to the Mother’s not sending for the Midwife in time: for as soon as the Midwife found, by passing her fingers, that the Hands presented, she sent for me.  This is what Midwives seldom do; trusting too much to, and depending on their own sufficiency, which very often occasions the loss of the Child, and sometimes of the Mother, and if not either of these, gives very great trouble and difficulty to the Man-midwife.

Several reports specifically specified problems that followed when a midwife failed to deliver the placenta, so that it was left in the uterus:

Case LXXVII Placenta in the Uterus
13 July, 1729:  I rebuked the Midwife for not sending sooner, telling her the danger she had exposed the poor Woman to by her delay.  She in excuse answered me that she had never had such an accident before, altho’ she had been Midwife above eleven years: however I found she was very ignorant.
Case CXII
6 February, 1727.  Gifford reported that three babies had been safely delivered but that the midwife had been unable to deliver the placenta. When she was called away another midwife attended but would not attempt to deliver the placenta in case she was held to blame should the mother die.  Although a doctor was called, he did not attend but prescribed medicine which, in Gifford’s opinion: would of consequence encrease the Flooding, and so hastened her Death.

Nevertheless, even in this case, Gifford’s censure was reserved for the midwives:
... so that this woman fell a Sacrifice to the ignorance of one Midwife, and the timidity of the other, for had the Burdens been brought away at first, before she had lost so much blood, she had been in no danger of dying.

Case XCII  On the Placenta in the uterus, and the String torn away.
14 November, 1729:  I was called upon about three a’clock in the morning, to go to a poor Woman in Lutener’s Lane ... This is one among the many misfortunes that attend a Man-midwife, when he is sent for too late, proceeding from the Negligence, Supineness, Ignorance, or Self sufficiency of the Midwife.
Case LXXXVII
Notes to the case:  Midwives have sometimes erred, by pulling the Navel-string they have endeavoured to bring away the Placenta, although another Child remained in the Womb.
Gifford attended the poorest women, including one resident of the workhouse and another who was unable to afford the attendance of a mid-wife:
Case LVII
23 January, 1728:  I was called … about two a clock in the morning, to go to a poor Woman in St. Martin’s Workhouse ... I told the Midwife, she was to blame in being so dilatory in sending [for me].

Case XLIII
The Patient was so poor, she was laid on a hard bed on the floor, and had not common necessaries, so I ordered another Woman to take her legs in her lap.

There were few hospitals in the early eighteenth century able to provide maternity facilities and only a few lying-in hospitals were established during the second half of the century. Therefore, the presence of female relatives or midwives was essential for normal deliveries throughout the century.

Gifford was one of the first men to use forceps, outside the famous Chamberlen family, and this aspect of midwifery will be considered in my next blog.