Health Care and Mental Illness, now and then

“Vulnerable people deserve to be fully protected at all times, particularly when they need to be deprived of their liberty in their own best interests. However, there are still unacceptable variations across the country.”


Sadly, this is not an apposite quote found in the archive of State Papers, taken from an eighteenth or nineteenth century commission enquiring into the need for county asylums and workhouses. Instead, it is a Department of Health response to Charlie Cooper’s twenty-first-century investigation into reports that that doctors are sectioning mentally ill patients unnecessarily, as a means of gaining access to a bed in a psychiatric ward: http://www.independent.co.uk/news/uk/politics/mentally-ill-patients-sectioned-unnecessarily-as-only-way-to-a-hospital-bed-8760166.html, The Independent, 14 August 2013.


The article happens to coincide with my own research on responses to medical and mental health welfare of the poor during the eighteenth century, both at a community level (using poor relief records for Thames Ditton, Surrey) and within the legal system (based on quarter session and assize records for Yorkshire).


The Poor Relief Act 1601 made provisions for the general welfare of the poor, requiring each parish to make provisions, inter alia, for the care of its ‘lame, old and blind’.[1] Major developments in the establishment of voluntary hospitals occurred during the eighteenth century, which witnessed the opening of Guys hospital and the Westminster in London, the Edinburgh Royal Infirmary, Scotland, Addenbrooke’s hospital, Cambridge, and the Bristol Royal Infirmary in the first half of the century. In the second half of the century other voluntary hospitals opened in the new industrial cities, including the Manchester Royal Infirmary, the Birmingham General and the Glasgow Royal Infirmary.[2] While the country remained dependant on voluntary hospitals, until the creation of the National Health Service in the twentieth century, during the nineteenth century local governments were at least required to oversee the provision of isolation hospitals, asylums, workhouses and infirmaries for those in poverty requiring long-term care.


Wherever possible, the infirm were cared for within their own parish. Poor relief records for Thames Ditton during the eighteenth century provide evidence of medical payments to doctors and others who attended the poor and infirm. In May 1736, five shillings was paid for the expenses of engaging a midwife for a pregnant woman; £1 1shilling to Dr Waterhouse for setting a boy’s collar bone; and 6s 2d for burying a man. As there was no infirmary in Thames Ditton, one shilling was paid to carry a boy to the hospital in neighbouring Kingston upon Thames, presumably for a more serious ailment than could be managed locally.[3]


The parish was equally responsible for those in its community who suffered with mental illness. People with a mental illness might be cast out by their families, in which event those who were deemed harmless might be left to cope as best they could. Those who were considered dangerous could be confined in gaols, poor houses or private homes, where they were likely to receive little care and controlled or restrained through the use of physical force and chains. Private asylums became increasingly common during the eighteenth century, housing both the relatives of the rich and paupers boarded out by their parishes. As with the early poor houses, asylums were unregulated and might be concerned in the care of only one person or the housing of a hundred patients. Nevertheless, whatever their size, asylums were intended to be run for profit and were reliant on public donations for their existence.


The Hospital of St Mary of Bethlem (Bedlam) in London was founded in 1247 to shelter and care for homeless people and by the early fifteenth century it began to focus on the mentally ill. Bedlam became a popular visitor attraction from at least the late sixteenth century and was notably portrayed in a scene from William Hogarth's ‘A Rake's Progress’ (1735). Public visitors were allowed as means of raising hospital income and donations from hospital visits to Bedlam raised between £300 and £350 per annum between 1720 and 1770.[4]


Just as an increasing number of voluntary hospitals were established across the country during the eighteenth century, likewise the first hospitals for the insane opened in Norwich (1713), St Luke’s in London (1751), Manchester (1766), Newcastle (1767), York (1777) and Liverpool (1790).[5] However, until the early nineteenth century there was no system of county or borough asylums for the insane in England. In the meantime, those in need of support for temporary or long term mental health issues were reliant on the many provincial madhouses established during the eighteenth century. One such establishment was situated in Great Foster House, Egham.[6] Parish records for Thames Ditton in August 1759 record payments totalling £4 12s 6d incurred in escorting Robert Pryor to Egham madhouse.[7] Running a private madhouse must have been a fairly profitable business, as Daniel Defoe estimated that in 1724 there were fifteen private madhouses in just the London metropolitan. Defoe was, however, a critic of the ease with which people could be confined in madhouses and was an active lobbyist for their regulation.[8]


Wornham Daniel first appeared in the overseers’ accounts for Thames Ditton in 1750, details of which are set out in Table 1 below, following which the parish bore the costs of keeping him in London’s Bedlam for almost three years and subsequently paid for his care in the community.

Daniel spent intermittent periods in Bedlam between 1750 and1753 during which time additional expenses were incurred on his behalf by the parish, including payments for clothes, bedding and board. In September 1752 Daniel returned to the parish for a short period and payments were made to Mr Keel for his board in the poorhouse, otherwise used for the care of pauper children, and to Mrs Keel for making two shifts for him. In 1753 Daniel returned to Bedlam and then back to Thames Ditton, at which point he lodged (at the expense of the parish) with Mr Gardiner for five shillings a week until May 1756. It is possible that Daniel went through a period of greater lucidity between June 1756 and July 1760, when he received a direct pension of four shillings a week. After that date it is likely that he was admitted to the workhouse, as he disappears from the parish records.


What care would Daniel have received in Bedlam? James Monro held the post of Bethlem physican from 1728 to 1752, following which other men from the Monro family held the same post, without interruption, until the 1850’s. The hospital regime was a combination of punishment and prayer and, while it was considered a religious duty to care for people afflicted by mental illness, cold bathing, isolation and corporal punishment were believed to cure certain conditions.[9] The hospital inventory for this period includes chains, manacles, locks and stocks, although the use of physical restraints may not have been considered particularly unusual at a time when similar items appear in the inventories of private gaols.


Public concern for the mad and the bad.


Just as John Howard voiced concern about the state of England’s gaols in the 1770’s,[10] similar unease about the state in which many of the insane were kept resulted in the passing of a statute in 1774 which required five commissioners from the Royal College of Physicians to inspect private asylums in London, and justices of the peace to visit and license provincial asylums.[11] 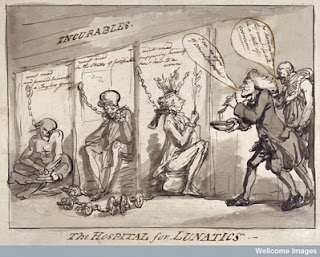 The Hospital for Lunatics. Bethlem Hospital, London: the incurables being inspected by a member of the medical staff, with the patients represented by political figures, Drawing by Thomas Rowlandson, 1789. © Wellcome Library, London.


Mental illness and the legal system.

According to Michael Spurr, NOMS (National Offender Management Service) Chief Operating Officer, 2010, at any one time ten per cent of the prison population have ‘serious mental health problems’[12]

An emerging awareness of insanity during the eighteenth century required a new vocabulary in the courts to describe mental states, which in turn affected gendered interpretations of criminal responsibility.[13] However, as in many areas of life, gendered interpretations were often overlaid with issues of social class and the deserving versus the not so deserving poor. For example,  although there was an increasing awareness of temporary insanity arising from pregnancy and childbirth, it is likely that until the 1770’s a defence to a criminal charge based on the mental health of a new mother was more likely to be available for a married woman than a single mother.[14]


At a time when prisons were run privately, for profit, the conditions of prisoners were very much dependant on their ability to pay for the removal of shackles, the provision of bedding and sufficient food beyond a basic diet of bread and water.


The Felons court-yard … is too small, and has no water … The cells are in general about seven feet and a half by six and a half, and eight and a half high’ close and dark’ having only either a hole over the door about four inches by eight, or some perforations in the door … In most of these cells three Prisoners are locked up at night; in winter for fourteen to sixteen hours: straw on the stone floors; no bedsteads.


Women-felons are kept quite separate: they have two courtyards, but no water.


The county pay an inspector to weigh and deliver bread to the prisoners twice a week.[15]


Nevertheless, in the 1720’s Yorkshire, a pregnant woman suffering from possible epilepsy might be committed to gaol pending her trial for a felony. A magistrate for Beverley wrote the following note to the gaoler at York Castle: “I send you two women one of them big with child & troubled with fits so if you should let her have the use of a bed for a while I will set you a reasonable allowance for it”.[16] It is notable that no mention is made of any additional allowance for a supplement to her diet.


It is possible that judges and juries paid attention to mental states when seeking extenuating circumstances which might mitigate the harshness of the ‘Bloody Code’, that is, the rising number of capital offences created between 1680 and 1820. The defence of insanity was not a solution readily sought, as it first required an admission to the crime alleged in order to minimise the ensuing sentence. However, if the defence failed, an admission of guilt resulted in the defendant being sentenced for the full offence alleged. The test for criminal insanity was not fixed until McNaghten’s case in 1843. Before then, courtroom vocabulary varied from case to case in the attempts to negate an accused’s ability to form the necessary ‘intent’ or mens rea for the crime alleged. For example, when a coroner’s jury in Yorkshire identified Robert Barker as having caused the death of Mary Issott by beating, they further determined that at the time of the incident Barker was “of insane mind and memory”.[17] Barker was acquitted of murder at the following assizes on the grounds that he was incapable of forming the intent for either murder or manslaughter.


However, Barker’s case cannot be taken on face value as evidence of a changing attitude to mental illness. Barker was described in the coroner’s records as ‘a gentleman of Beverley’. It is impossible to say whether his plea was genuine or if his social status, combined with an ability to pay for legal advice and representation, was the reason for the success of the plea of temporary insanity, thus avoiding a capital conviction.


Sadly, 300 years on, too many people with mental illnesses continue to be sent to prison rather than receiving treatment, while Stephen Dorrell (Health Secretary, 1995-1997) acknowledges that mental health services are under disproportionate pressure from local healthcare cuts.[18]