The Victorians did not invent the Workhouse

Contrary to the impression given by the current ITV series ‘Secrets of the Workhouse’, the Victorian workhouse was not an original concept. Legislation for the relief of the poor in England and Wales dates back to 1536 when each parish was instructed to undertake voluntary weekly collections to assist the‘impotent’ poor. An Act of 1550 allowed parishes to open workhouses where the poor of the parish could be provided with food and accommodation in exchange for unpaid work.


Until 1834 the system of parish relief and provision of workhouses was determined on a parish by parish basis, where decisions regarding the raising of parish funds and distribution of poor relief were taken by parish officials at vestry meetings. The operation of the poor law in Thames Ditton in Surrey, 1723-1782, was the topic of my Masters dissertation some eight years ago and this blog in my opportunity to dust it off and incorporate some of the additional material I found along the way.


My plan over the next few weeks is to write a series of blogs that consider various aspects of the poor law during the Georgian period, as applied in the parish of Thames Ditton, under the following headings:


1. Thames Ditton: the Place and People.


Thames Ditton was mentioned in the Domesday Book, when it included the manors of Claygate and Weston, while the parish church of St Nicholas dates back to the eleventh century.[1] By the eighteenth century Thames Ditton was a post town on the London to Portsmouth road and contained the two manors of Imworth and Claygate and the hamlets of Weston Green and Ditton Marsh. It stretched 2½ miles from north to south and 1½ miles east to west, bordering Kingston upon Thames and Long Ditton to the east, Cobham to the South, Esher and the river Mole to the east and the river Thames to the north.[2] 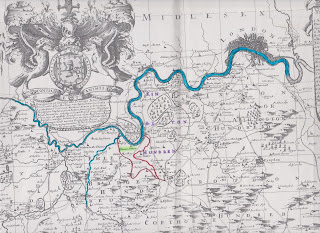 The river Mole, which runs through the parish, has been mentioned in poems by Spenser, Drayton, Milton and Pope. It was said that by the time the river reached Thames Ditton it became less attractive as the course of the river followed a flat area of at marsh-land until it joined the Thames at East Molesey.[3] A series of naturally occurring underground caverns and passages created‘swallow’ holes, which made it appear that the river disappeared below ground then reappeared some distance away.[4]Those features are less evident today as a result of improved drainage.


The pub and the church. 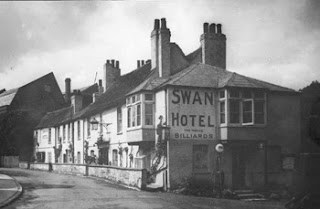 The Swan Inn at Thames Ditton is situated beside the River Thames, just across the river from Hampton Court Palace. (Henry VIII was said to be a frequent visitor to the inn and, apparently, his seal of approval for the inn is held in the British Museum). The Swan, the George and the Red Lion inns on High Street and the Angel Inn on Giggs Hill, are mentioned in the parish rate books (1770–1785) as meeting places for parish business and are all still in business today as public houses.[7] 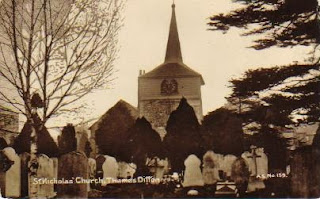 St Nicholas Church is quite small, which may explain why parish meetings took place in local inns rather than the church vestry. It is built of flint and stone and dates back to at least the early twelfth Century, with the addition of a tower in the thirteenth century, the North Arcade in the sixteenth century and the South aisle in the nineteenth century. Inside the church are a number of monuments and memorials to notable members of community.Memorials to the various ministers of the Church reveal a steady occupancy of the seat, in particular the Reverend George Harvest (1728-1789) who ‘zealously attended to the duties of this curacy for nearly 40 years’.The greater majority of the parish are likely to have attended St Nicholas Church. The Bishop’s return for 1725 noted that there was neither ‘papists’ in the parish nor any meetings of ‘protestant dissenters’ and, even then, the four families of dissenters ‘occasionally conform’. In 1788 the returns similarly record that there were still no papists and no meetings of dissenters.


Many families of significance made Thames Ditton their main or second home due to its proximity to Hampton Court, Claremont and Esher Place; the market and coach service in Kingston; and the rural aspect of the village.


Here lawyers, free from legal toils, And peers, released from duty,
Enjoy at once kind nature’s smiles, And eke the smiles of beauty:


Shem Bridges, esq., held the manor of Imworth from 1693 until his death in 1711, when he was succeeded by his nephew Henry Bridges, esq.
Henry Bridges settled the manor and estates of Imworth, which included Ember Court (otherwise Imber Court), on his niece, Ann Bridges (daughter and heiress of John Bridges, esq., also of Thames Ditton), on the occasion of her marriage to Arthur Onslow.
Arthur Onslow (1691–1768) made Ember Court his home and was variously JP, MP for Surrey, and Speaker of the House (1728-1761) and upon his death, he was succeeded by his son George Onslow.
George Onslow, 1st Earl of Onslow (1731–1814) MP for Surrey, lord lieutenant and custos rotulorum for the county.[11] When George Onslow sold the manor in 1784 to George Porter esq., it was described as comprising ‘a capital mansion, other houses, and about three hundred and twenty five acres of land, all tithe free.’[12]
Lord Henry FitzGerald (1761–1829) lived at Boyle Farm.
Colonel Sidney Godolphin (1652–1732) MP and‘Father of the House’.
Sir Richard Joseph Sullivan, bart, MP (died 1806) lived in Ditton House which stands on High Street along-side The Swan Inn.[13]
Cesar Picton (1755-1836) brought to England from Africa as a slave and in 1761 presented as a servant to Sir John Phillips, bart, of Norbiton, Surrey. He later became a businessman and owned the wharf and a malt house in Thames Ditton.[14] 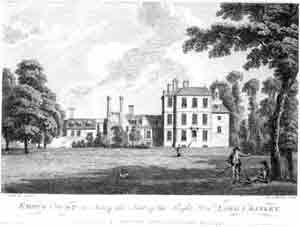 The Manor of Claygate was held by the Evelyn family at the end of the seventeenth century when it passed to Henry Byne, esq. It was bought by Lord Chancellor King in 1727 and was held by the same family for the remainder of the century.[16]


The demography of the parish during the eighteenth century can be assessed by an examination of the hearth tax returns, 1664,[17] the Bishops Visitation, 1725 and 1788, the 1801 Census, and parish rate books. The hearth tax returns for 1664 recorded a population of about 715 in 150 houses (assuming a factor of 4.75 per family unit based on family sizes recorded for the parish in 1801). The visitation of 1725 records 200 families in the parish, which (using the same factor) would give a population of 950. A population of 900 was recorded in the visitation records for 1788, indicating that population levels were either falling or fairly stagnant. Joan Thirsk observed that population growth in England over the period 1640-1750 was only moderate and any growth uneven, with periods of stagnation if not actual decline in the middle decades of the century, which appears to have been the case in Thames Ditton.[18] The census of 1801 recorded a population of 1,288 for the parish, constituted in 270 families, living in 265 houses, i.e., about 4.75 persons per family.


The same records provide evidence of the social structure of the parish. The hearth tax returns for 1664 record that, of 150 properties, 100 hundred houses (66.7 per cent) had one or two hearths. Sixty-eight people were exempt from charges as being too poor to pay, and they are likely to have been occupants of the sixty-three houses with only one hearth, with the remainder living in those with two hearths. At the other extreme, fifteen houses were recorded as having between five and nine hearths while four households had in excess of ten. The rate books for November 1755 indicate a similar social balance in that out of the 200 families living in the parish, approximately 130 families occupied houses with a rent value of less than £5 per annum (65.0 per cent, additional land holding outside the parish not included), while thirteen households occupied properties valued in excess of£50 per annum.


Thames Ditton was mainly an agricultural community with some rural crafts and trades. A guide to the occupations of the general population during the eighteenth-century can be found in the 1801 census, which recorded 167 people chiefly employed in agriculture and 87 in trade, manufacture or handicrafts.[19] The rate books for the eighteenth century make reference to a number of farms, orchards, woods and kitchen gardens and to various parishioners occupying meadows and woodland belonging to the Onslow family, Lord King and the Bishop.


Other evidence of trades undertaken within the parish can be found from an examination of the overseers’ accounts. Their accounts record the payment of bills to various residents for the manufacture or provision of bread, food, shoes and clothing for the poor. Further entries include payments for work undertaken by local ratepayers, employed as carpenters, bricklayers, plumbers, blacksmith, or tradesmen providing coal, ironmongery and other goods to the parish workhouse. Only a few poor apprentices were placed within the parish, therefore, little information can be abstracted from apprenticeship records on local trades other than the presence of a blacksmith, watermen, fishermen and farmers.


The first records of Ember Mill appear in the early 1600’s. Using water power from the river Thames it was originally used for grinding corn and converted to a metal/lead works in the middle of the seventeenth century. In 1638 it was adapted for the manufacture of brass and iron wire.[20]The rate books for 1760 refer to the melting house’ or ‘smelting house’at Ember Mills and it is marked on Cary’s map of 1786 as ‘Iron Wire Mills’.[21] Overall, the records for Thames Ditton fit Thirsk’s description of life in England between 1640 and 1750, with ‘slow population growth, cheap and adequate food supplies, and proliferating employment in specialized agriculture, in horticulture, and in industries and servicing trade’.[22]