A researcher would expect to find cases of murder by poisoning in the assize records, although they do occasionally crop up in quarter session records, usually when a failed attempt has been redefined as a misdemeanour/assault. However, as in the case of Edward Hope indicted at quarter sessions for the murder of a young boy by poisoning, such cases were normally committed for trial at the assizes.[1]


4:  That Care be taken to put the Laws in strict execution against the atrocious crimes of murder and Robbery, more especially murders by poisoning, which are of late grown more frequent than formerly, and Robberies upon the highway and House-breaking; and against the Heinous Crimes of Perjury and Forgery which are at the greatest height.[2]

As the modus operandi for murder, poisoning does not require the physical strength or speed needed for an assault with fists, a stave or a knife, or the accuracy for firing a gun. During the eighteenth century, poisons were readily available in the market place and could be administered in small doses so that the eventual death might appear as the result of an everyday illness. Poisoning within the home was of particular concern and, if one spouse was in fear of being poisoned by the other, the law considered it “good Cause to pronounce Sentence of Separation”.[3] Contemporary opinion was that poisoning was a “Crime much oftener committed by Women than by Men, for they having it in their Power, nor perhaps in their Will, to avenge themselves openly on such as offend them”.[4] 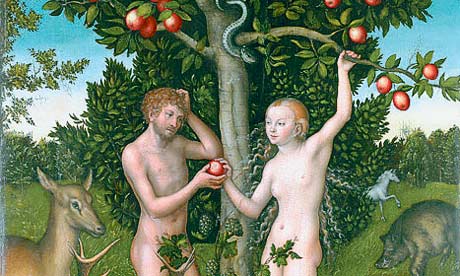 Adam and Eve by Lucas Cranach the Elder.

As the weapon of choice by a woman it provided evidence of female deviousness going back to the time of Eve and was interpreted as a violation of a fundamental law of nature. Not only did it imply malice aforethought but “it clearly violated the trust every man had to place in his wife when he sat down to his dinner”.[5] While historical evidence is that poison was neither the preferred modus operandi of women who killed nor a method reserved solely to them, the outcomes following the conviction of male or female poisoner could be quite different.

When Elizabeth Webster was convicted of the murder of her husband by poisoning in 1743 she was sentenced to death[6] and, in 1767, Ann Sowerby was convicted of the same offence and sentenced to burn at the stake.[7] In contrast, when James Browne was capitally convicted of the murder of his wife by poisoning, his sentence was commuted to transportation for seven years.[8] In slightly different circumstances, John Scott was convicted of murdering his servant (who already had a three year old child by him) by giving her a fatal abortifacient.[9] Sir Henry Gould, the presiding judge, made no recommendation for mercy but added a requirement that Scott’s dead body be dissected and anatomized after he had been hanged. However, a private petition for mercy must have been made by a person or people of influence because by the following assizes his sentence had been commuted to transportation. 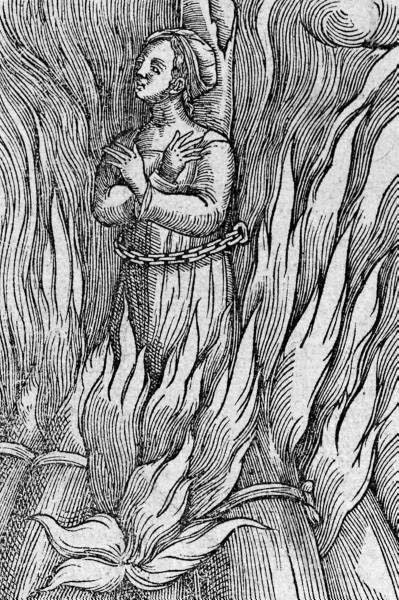 Execution of Mary Channing at Maumbury Rings, Fordington, Dorchester, 21st March 1705/6 for the murder of her husband by poisoning. http://freepages.genealogy.rootsweb.ancestry.com/~fordingtondorset/Files2/ExecutionMaryChanning1704.html
The disparity in sentencing of men and women was inevitable when they were convicted for the murder of a spouse, because the law required that they be judged by different criteria. Three forms of homicide fell within the category of ‘petit treasons’: when a wife killed her husband; a servant killed his or her master; or when a person killed his or her priest.[10] The law reflected the position of a priest in his parish and a man in his home as microcosms of the king’s rule over his subjects. As a result, homicides which fell within the category of petit treason were beyond an assize judge’s powers of reprieve and required intervention from the king if any pardon was to be considered. The same restrictions did not apply in cases of murder when an assize judge could reprieve a capital convict with a recommendation to the Secretary of State that they were ‘fit objects of mercy’. When a man’s violence towards his wife, child or servant was perceived in terms of the ‘natural’ authority a man held as head of his household; reciprocal violence by a wife or servant was subversive and a threat to social order.

Therefore, while a man who killed his wife might either be hanged, reprieved for transportation or have the charges against him reduced from murder to manslaughter, the penalty (between 1351 and 1790) for a woman who killed her spouse was that she burn at the stake for her petit treason.[11] The same gendered differences applied to the murder of a master or mistress, for which a female servant would be sentenced to burn and a male servant hang. In circumstances where a homicide could be described in terms of manslaughter, a wife or female servant could be sentenced to be branded and/or to serve a short term in gaol, on the same terms as a man similarly convicted. 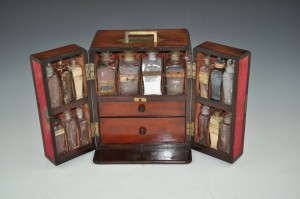 Apothecary’s Box from 1840, featured in a
newsletter from Hampton Antiques
http://mikerendell.com/a-spotlight-on-the-medical-profession-in-the-eighteenth-century/
Elizabeth Webster (1743) was convicted of poisoning her husband and sentenced at York assizes to burn at the stake. Statements were taken from the examining surgeon and eleven male and three female witnesses. Statements from neighbours provided evidence of arguments between the couple concerning the wife’s affair with another man and outbursts in which she exclaimed that she wished her husband dead.[12] One witness failed to appear in court to give his evidence and, although sufficient witnesses remained to secure her conviction, Hargreaves was one of the few witnesses noted in the records as being required to forfeit his recognizance to appear, indicating the determination of the court to secure the conviction of a woman who killed her husband and master.
Webster was fortunate in successfully ‘pleading her belly’ and it is likely that her sentence was respited until the birth of her child, following which her sentence was possibly commuted to transportation: there is no record of the execution having taken place. Following Ann Sowerby’s conviction for petit treason by poisoning (1767) she too attempted to escape a capital sentence by ‘pleading her belly’ but her claim was rejected by the jury of matrons who examined her.[13] The presiding judge, Henry Bathurst, was unable to ask for a reprieve and Sowerby burnt at the stake on 10 August 1767. Although few women were convicted of petit treason, those that were would not expect to be shown any mercy. In contrast, following the conviction of James Browne (1767) for the murder of his wife by poisoning the same judge, Henry Bathurst, recommended that Browne be reprieved for transportation for seven years.[14] One might expect a man who poisoned to be more greatly condemned for having stooped to the deceptive tactics normally associated with a woman, or perhaps they just thought him to be a very weak man.

Assize judges were not generally sympathetic to men who poisoned. Sir Henry Gould attempted to put the aforementioned John Scott to the most severe sentence for poisoning his servant/mistress but public opinion appears to have acted in Scott’s favour. Similarly, although Thomas Butler was only charged and convicted of a misdemeanour following his failed in his attempt to poison his master, he was sentenced to a term of two years in gaol at a time when other men convicted of manslaughter might expect to be released immediately after being branded on the hand.[15] 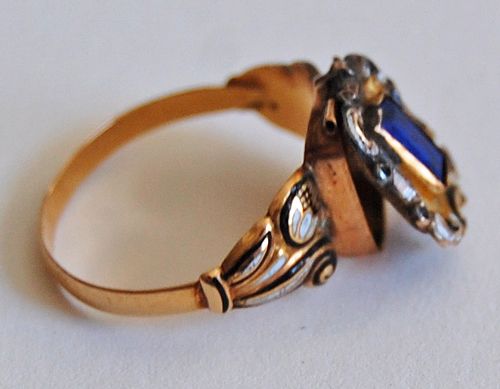 18th century poison ring,
http://www.rubylane.com/item/474691-x284O12x29/18th-Century-POISON-RING-14K
Today it is generally agreed that the notion of the ‘female poisoner’ is a myth and the victims of a  poisoner was just as likely to be an unwanted husband, wife, lover, illegitimate baby or employer.