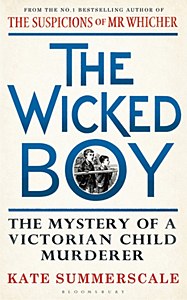 Kate Summerscale tells the true-crime story of child murderer Robert Coombes. No author of historical crime-fiction could come up with a more credible storyline of sin and redemption. This morality tale benefits from meticulous research into the crime and its aftermath. In July 1895, ten days after Robert Coombes senior had gone to sea, thirteen-year-old Robert Coombes and his twelve-year-old brother Nattie were arrested for the murder of their mother and sent for trial at the Old Bailey. The criminal trial was fully reported in the newspapers and the story that emerged echoed the plots of the 'penny dreadful' novels favoured by Robert and dealt with evolving theories of criminality, childhood, and insanity. The facts of the case were fairly straight forward as Robert confessed to having stabbed his mother. Although there was an issue of the extent to which the younger brother was his accomplice, Nattie struck a plea and gave evidence against his brother. Robert's lawyers successfully argued that he was insane and he was sentenced to detention in the criminal lunatic asylum at Broadmoor. The seventeen years spent in Broadmoor provided new opportunities for Robert where he trained as a tailor and became a member of the asylum brass band and cricket team. On leaving Broadmoor Robert was discharged into the care of the Salvation Army colony in Essex and from there he left England to join his brother in Australia. In addition to her detailed research, Summerscale creates atmospheric context around each setting of Robert's life, from the crime in the East End docklands; the police investigation and criminal trial; confinement in an asylum; distinguished service in the Australian army during the Gallipoli campaign; and life in 1920's and 30's Australia where Robert undertook the care of a troubled young man, saving him from a similar fate. Robert Coombes died in 1945.

Buy it now from The National Archives on-line bookshop: